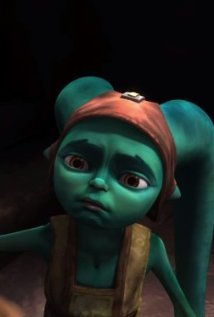 -- The costs of war can never be truly accounted for.

Continuing the Ryloth story, we pick up with Obi-Wan making his ground assault now that Anakin and Ahsoka have broken the blockade. This episode is back to dealing with a moral dilemma, and it's an interesting one, at that.

The Republic is there at Ryloth to liberate the twi'leks. As such, Obi-Wan lets the clones know during their landing that that means not destroying the twi'leks homes and such. That means they can't just bomb the living heck out of the droids. The droids that have built their bases in the twi'lek villages. Oh, and the droids are also using the twi'leks as living shields, the commander droid having calculated that the Jedi would be much less likely to wage an all-out attack against them if they were behind a hostage shield.

Some of the clones are not happy about the situation and think there is too much concern for the "tail-heads," as they call them. They just want to destroy the droids, and they don't really care if the natives get in the way.

To make things more interesting, two of the clones, one of whom really doesn't like the tail-heads, run into a young twi-lek probably orphan while they are on a scouting mission. Or should I say "pick up a young twi'lek"? Either way, it gives the clones (and through them, the audience) a different perspective on what it's like to have your village ravaged by invaders.

The struggle to save the twi'leks without destroying their villages -- and without bringing harm to them -- is an interesting one. It makes me think of all of those epic super hero battles to save the city... in which they destroy the city. Is what you did worthwhile in those cases?

Also, as an aside, the other day my wife and I were talking about education in the South and why it is so poor compared to education in the rest of the US (there are no Southern states in the top 10 ranked states for education and only four in the top 25). One reason is that the South's education system is still suffering the effects of the Civil War. And I don't mean just inaccurate teaching (like the debacle going on in Texas, right now, with the new text book that was released that refers to slaves as "migrant workers") but the fact that the school system has suffered a lag in performance directly tied to the effects of the war. So, if you glance up at the opening quote from this episode, you can see that it's completely true. The lack of adequate education has been a high cost (that can never be measured) for the South.