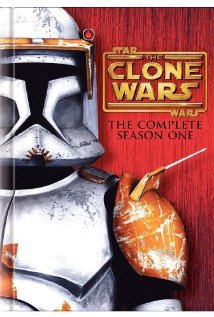 I've watched more than my share of sci-fi on television, not all of it very good. Some of it downright bad. Some of it, like the first season of Star Trek: The Next Generation, so horrible that there's no legitimate reason it should ever have been allowed to continue. Star Wars: The Clone Wars is not one of those shows. The Clone Wars, in fact, is good sci-fi, even in its first season. It "suffers" from only two things, at least in the minds of most people:
1. Its connection to the prequels.
2. It's animated.

Seriously, in this day and age, why do people still belittle "cartoons." It's not a cartoon, okay. Quit calling it that. And, really, when you say, "I don't watch cartoons," in reference to, say, a Pixar movie or a Studio Ghibli film, you just sound dumb and/or weirdly prejudice. The Clone Wars is in the same realm. Sure, it's "targeted" at kids, except that it's not. Really, it's just produced to be "kid accessible," but kids are not necessarily the target audience. The target audience is anyone who wants a more fleshed out view of the Star Wars universe.

As for its connection to the prequels, you just need to get over it. My gosh, they happened. Get your collective heads out of your asses and grow up.

So The Clone Wars does flesh out the Star Wars universe, and it did it on an ongoing basis for six years. For me, the best part of the series is seeing the relationship between Obi-Wan and Anakin develop. From just the movies, you don't get to see the bond between the two and just how strong it was, so, unless you can fill in the gaps yourself, you fail to grasp the trauma for Obi-Wan when Anakin turns to the Dark Side and he's forced to confront him. I think most people failed to grasp that simple concept. The Clone Wars allows you to see and experience the brotherhood of the two men.

The other thing The Clone Wars does really well is explore just what it means to be a clone. A product. Within that, what does it mean to be an individual? What is the importance, the value, of one clone? Or, more appropriately, one person?

What I'm saying is that The Clone Wars explores real questions and looks at real issues and puts those things in a context that pretty much anyone can understand. It's no mere cartoon. The first season is strong. It didn't need time to "find its legs," as so many other, especially sci-fi, shows do. This series should be a must watch for any Star Wars fan. Any real Star Wars fan, at any rate.

However, as good as it is, there are still some episodes I like, I'll say, less well. Only two, though, really. You can see the reviews for those two:
"Blue Shadow Virus"
"Mystery of a Thousand Moons"

Picking a favorite episode from the season is much more difficult. For instance, I love half of the episode, "The Gungan General." The parts where Anakin and Obi-Wan have to work with Dooku to escape the pirates are some of my favorite moments of the season, but, then, they are countered in this episode by it being the absolute worst usage of Jar Jar in the entire series (or, at least, season one, but I think it's true of the series as a whole).

But, fine, I'll pick one! I'm going to go with
"Storm Over Ryloth"
as my single favorite episode. As I said in the review, I highly recommend it.

Next week, we start season two! I hope to see you there, and, remember, you can decide to participate in this blog event at any time. Just go here to sign up!
Posted by Andrew Leon at 12:00 AM