Sometimes, life isn't fair. Things happen that people have no control over, like natural disasters. Or there are accidents where someone isn't paying attention and bad things happen, like car accidents. Or someone gets sick, really sick. Those things just happen, and they're not the fault of anyone, not in any malicious sense. And they're just not fair.

Then there are the malicious acts, the things people do on purpose that cause harm to other people, even things where the people doing the harm think they are "in the right." Those, possibly, are the worst acts, because they justify their actions and convince themselves that the offended "deserve" it. They only got what was coming to them. If you're thinking of the Nazis, you would not be incorrect, except that that is not whom I'm talking about. Unfortunately, I'm talking about the Church and, specifically, the Catholic Church.

I don't have anything against Catholics, but it's difficult for me, at this point in my life, to have sympathy for the Catholic Church at all, despite the fact that I think the new Pope is pretty cool. The history of the Catholic Church is so full of injustices done for the "good" of people it makes it difficult to see any actual good. The fact that this stuff is still ongoing and that we are constantly finding out about new ways in which the Church covered up wrongs and, even, allowed them to keep happening is incredible to me. To paraphrase a line from Philomena, "If Jesus was here, he'd tip the Church out of its wheelchair, and it wouldn't get up and walk!" 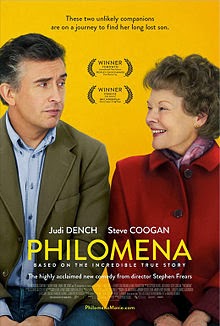 And, now, the spoiler warning!
That was it. The warning, I mean.

The movie is not about the Catholic Church while being about the Catholic Church. It's about a woman's search for her son, who was taken from her against her will and sold... by a nunnery. Because that's what they did with unwanted girls and their babies, wanted or not. Basically, young girls who had become pregnant and, therefore, an embarrassment to their families were given over to this particular convent as slaves. Seriously. They were held for a particular amount of time and made to work everyday unless they could buy their way out of it. Of course, they weren't paid for their work, and their families had abandoned them there, so they had no way of coming up with any money with which to purchase their freedom. They were also forced to sign away the rights to their babies, which were then sold, usually to Americans. It was horrid.

So... slavery and selling babies. Just par for the course for the Catholic Church, I guess. And, of course, after the fact, they lied to both the mothers and the children who were trying to reunite with each other. And burned all the records so that they could honestly say, "the records all burned up in the great fire."

I suppose I might be able to start getting over my ill feelings toward the Catholic Church if all of this stuff was in the past. If this was stuff the church used to do, but this stuff... this stuff just happened. It took an investigative reporter to uncover the truth of  this situation because they, the nuns and the church, were still busy lying about what had happened. And we continue to find out about things like this month after month. It makes it difficult to look at any good things the Catholic Church may have done.

Steve Coogan is amazing in this movie. He also co-wrote the script. I'm used to him playing comedic side characters of no real import, but he was completely convincing as Martin Sixsmith, the reporter who investigated the convent in order to help Philomena track down her son. I hope Coogan pursues more work of this nature, both writing and acting, because he was excellent.

As was Judi Dench, but that's to be expected. However, if you're used to her in more commanding roles, she may surprise you in this one as the somewhat-daft-and-possibly-not-always-quite-in-touch-with-things Philomena Lee. She was a pleasure to watch and deserves her nomination.

Philomena is a very good movie, certainly one of the best I have seen this year, so I can totally support its nomination. I don't think it's going to win, nor do I think it should, but it's not out of place on the list. And, now, I actually (more than) kind of want to read the book, The Lost Child of Philomena Lee, and, when you adapt a book into a movie (whether it's a true story or not), I think the highest achievement of the movie is that it makes you want to read the book. I'm not saying I will (because my TBR stack is huge), but I want to. Also, it's good to get more of this stuff from the Church out into the open and, hopefully, prompt them into some real change.
Posted by Andrew Leon at 10:22 PM