There are, occasionally, those movies that come along where the best response I can generate for them is, "Well, that was interesting." The Wolf of Wall Street is one of those movies. 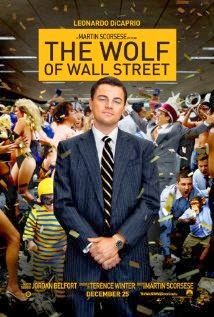 It's not a bad movie--certainly, the performances are great--but I can't say that it was a good movie, either. It... well, it just was.

I suppose the main issue I have with it is that I'm not sure what the movie was trying to say. What it was about. Sure, the movie is about Jordan Belfort, but, usually, when you make a movie about someone's life, it's because you think there is a message people can take away from the story about that person's life. For instance:
12 Years a Slave: Survive. Plus, you know, slavery is bad.
Dallas Buyers Club: Don't succumb to the system if the system is wrong. Plus, you know, rich, white men don't care about anything other than taking your money from you.
Saving Mr. Banks: Creation is a personal act and the creation remains a part of the creator. As Walt said about Mickey, "He's family."
Those are just some of the ones from this year. But I don't get a sense that there is any real message in Wolf. No underlying theme. Maybe the movie is just too chaotic for that. At any rate, I didn't feel like I came away with anything at the end of the movie other than Belfort was really screwed up.

Also, I'm pretty sure it's not just me that has an issue with discerning a meaning in this movie. Well, my wife didn't see one, either. But! In doing my research, I found a reviewer who went to see this in a theater full of the kind of financial guys that Belfort was. They certainly saw the movie differently from me as the reviewer said they cheered "in all the wrong places." When Belfort would do something bad (like when, after he's sober, he rips up his couch to get at his hidden stash of drugs), the guys in the theater would cheer for him. I take that to mean that there is no clear message in the movie, because, if there was, those people would not be cheering.

But maybe Scorsese did it that way on purpose? Maybe he's just presenting the story of the man's life and letting people come away with their own message? Certainly, the actors (DiCaprio and Hill) have taken a lot of flak over their portrayals (which I just don't get; why is Scorsese not taking any heat over it? He's the one that presented it the way it is), that they were glorifying the drug use and partying and, well, everything that they do in the movie. I can understand why some people might think that the movie is an endorsement of that behavior. The problem is that you just can't tell.

Not to mention that the movie resorts to that starting in the middle of the action thing and then jumps back to the beginning. For no purpose, evidently, other than to start with dwarf tossing. Why? It doesn't make the story better. It serves no purpose within the story. Why does everyone and their dog feel like you have to start somewhere in the middle and then go back to the beginning to explain whatever weirdness you're seeing? It's a cheap trick, and I'm so tired of it.

There's also that the movie is three hours long. Three hours long of wondering what the point is to get to the end to find out that there was no point. Granted, it was a quick three hours due to the frenetic pace of the movie, but not really a satisfying three hours. And it was three hours after being cut down for being too long. It makes me wonder what they took out.

Anyway... I'm actually disappointed that this movie has received a best picture nomination and that Scorsese has received a best director nomination. I suppose I can't fault them for the best actor and supporting actor nominations, because they did deliver great performances, although, as my wife pointed out, the character of Belfort has become DiCaprio's norm, so it wasn't a stretch for him. There's not a great chance he'll win, anyway, so I can live with the nomination.

In the end, I think what's happening with this movie is what happens with any movie like this that critics can't figure out: Instead of just saying they don't know, they say it's great. That way they mask their ignorance. Personally, I think Scorsese missed with this one and everyone is too afraid to say so.
Posted by Andrew Leon at 9:56 PM