Back when I was in college, my best friend got married... um, actually, that happened several times. The pattern tended to be

Anyway, my best friend got married (this was the last of these to happen before I finished school). Someone gave him a refrigerator, I think? Some large appliance, at any rate. Maybe it was a washer and dryer. It doesn't really matter; just insert whatever large appliance you prefer into this scenario. Something that was too big for one person to easily handle. So, yeah, he called me to help him move it. (Yeah, it was used, whatever it was.)

It's important to note, at this point, that I'm a pretty strong guy. I have often been the friend that was called to help people move things or whatever because I was the strongest person they knew. So he called me. Not a problem. You know, the whole best friend thing and all. Well, plus, the only other person we knew that was good at that kind of thing was notoriously flaky about actually showing up to help out with things he'd said he'd help with (to be fair, it wasn't always his fault (but that's a different story)).

We went to the place, and we loaded the thing. He'd borrowed someone's pickup truck for the day. It was a mid-sized truck. White. No, the color's probably not important, but I do remember that, and I think I ought to get in all the facts that I remember, right? And we drove to his new place. A little house he and his brand spanking new wife were renting. Wait, forget that spanking comment. I rather doubt they were into that. Look, I knew the guy, not you, and I'm pretty sure that was not a thing for them, so just drop it, okay. I'm sorry I said anything. Sheesh! Minds, people!

What I should have said, anyway, was that we tried to drive to his new place. We got into viewing distance of his house, maybe 150 yards, and... the truck died. See, there was a rise in the road to accommodate the railroad tracks going through, a rise the height of which was only, maybe, three feet, and the truck couldn't make it over. We hit the hill, the truck made a weird noise, shuddered, and stopped... for just a moment, before it rolled back the short distance it had gone up. If only we had known that it wasn't going to restart, he could have jammed on the brake, but we didn't know, and it wouldn't start.

I am not a car guy.
Neither was he.

But we could see his house. And the truck was in the road. So we did the kind of thing that you do when you're young: We pushed the truck.
Or, rather, I pushed the truck. Because someone has to have a hand on the steering wheel, and the most help that that person is in a situation like that is that he is not in the truck. I pushed the truck... UP the hill. Yeah, I hear you saying, "But you said it was only about three feet high," which is true, but that was the height, not the slope. And, if you remember any of your geometry, you will understand it when I say that the slope was considerable.

So I pushed a ton (or more) of wheeled metal up the hill while my friend kept the truck going straight, which it didn't want to do, and I thought I was going to die. You know Sisyphus? 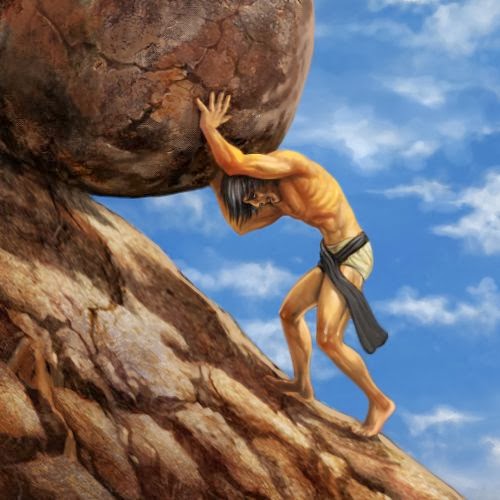 Yeah, it was like that. Okay, so it wasn't quite like that, but it was like that. All I could see was the back of the truck, the road, and my feet. I had no idea how far I'd gone or how far I had to go. It was just move one foot in front of the other and do not stop.

Why not stop? Because, as we already noted, unless someone was able to step on the brake (and no one was in the truck at this point, remember?), the truck was just going to roll back down again, and I was sure if that happened that I wouldn't be making a second attempt to get that truck up the hill.

And that is what all this self-publishing stuff is like sometimes. You push and you push, but you can't see how far up the hill you are (you don't even know how long the slope is), but you can't stop -- I've seen people who have stopped -- because you will lose all your momentum, your uphill momentum, and slide back down to where you started and, at best, have to start all over again. All over again. At best. I've seen many people that have not, at least at this point, started again. You have to push and push and keep going and keep going until...

Eventually, some small eternity later, I pushed the truck up onto the top of the hill. The pressure disappeared, and I almost fell down. Then there was running to push the truck down the hill and get it going as fast as possible so that it would coast all the way to the house. Which it may have, I don't remember. What I remember is nearly passing out and laying in a cold sweat on the couch while my friend and his wife asked me if I needed help. When I recovered, and I did recover, I got up and helped move the hunk of metal from the back of the wheeled hunk of metal into the house.

A lot of writing a book, publishing a book, is just like Sisyphus, just like pushing a big rock up a hill all by yourself. If you're lucky, you may have someone that can help you steer your rock (or truck or whatever) so that you, at least, stay on course but not always. At any rate, it all comes down to the hope of hitting the top of the hill so that you can finally quit watching your feet and the ground and take a breath or three. One of the really solid things I've learned, though, since I finished my first book and started this blog is that, once you start, you can't quit. Well, you can, but it frequently will mean that you have to start all over at the beginning again, start gaining momentum all over again. Until you hit that peak (hopefully only the first of many), you have to just keep going, so you have to be prepared to just keep going. One step. One step. One more step.

This post has been brought to you in part by the IWSG and Indie Life.
Posted by Andrew Leon at 9:49 PM