"This is no time to panic."

"This is the perfect time to panic!"

Okay, so no one is really panicking, but that's one of those lines that pops into my head anytime anything is going wrong. Sometimes, it's joined by the corollary to the first part of that exchange: "Don't Panic!"
It always makes me want to grab a towel.
Speaking of which, it was Douglas Adams' birthday this week.
And all the loose computer cables we have running everywhere right now makes me think of him, because he had things to say about loose computer wiring and cables.
Which brings me back to what all of this is about. Or one of the things this is about.

We are in the midst of restructuring our computer set up, because I was gifted a computer by my good friend that works over at Lucasfilm, which is very timely, because I'm sure my wife's (old) computer is going to drop dead any day now. It's just like the one I had drop dead back in the fall, and we got them at the same time, and it's sounding really bad, lately. Like a guy with lung cancer or something. I'm halfway expecting it to explode or some such. But I digress...

So we have this new computer, which is currently set up across the room from the place where it will eventually be, so there are cords stretched all over the place. The worst one is the one running from our phone socket on the wall in the kitchen over to the modem. Earlier this week, my oldest son stepped on it and jerked it forcefully from the jack, breaking the clip that holds it in. Of course, that was accompanied by a loss of Internet connection, which was accompanied by me losing what I was working on, because I couldn't save it.

Why couldn't I save it? Well, because... That's the best answer I have. Once I got everything set back up again, my computer wouldn't recognize the connection. The other computers did, but my computer kept saying, "Hey, Buddy, what do you think you're doing? We got no connection here."
No, I do not know why my computer talks like that, but it does. And I said, "Why, yes, we do have a connection," and I held it up and showed it and said, "The other computer recognize it; why not you?"
And it replied, "I'm tellin' ya's, we got no connection."
And we went on like that until I shut it off. When I turned it back on, it said, "Oh, hey, you plugged us back in."
But I didn't get to save anything, because I had to re-boot to get the computer to recognize that I had re-connected everything.

Then, Wednesday morning, the dog jumped on the phone line. 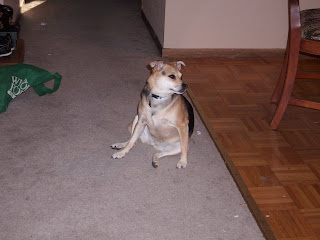 Whatever she did, she did it good. I spent around 30 minutes trying to get the connection working again and hadn't managed it by the time I had to get the kids to school. Once I got home, I spent another hour working on it before I got everything working. It's like the sudden disruption just fired everything, and I had to go over every piece of equipment and every connection. I don't know what was actually knocked loose or what, but, eventually, I did something that got it all working again.

And, while I was doing all of that, I had Bill Murray screaming in my head, "And if I can't work, THEN I CAN'T WORK!"

Which just makes me glad I'm not more plugged in than I am, because I hear too many stories about people that don't know what to do with themselves when they lose or break their phones. No, sir, I don't want one of those. 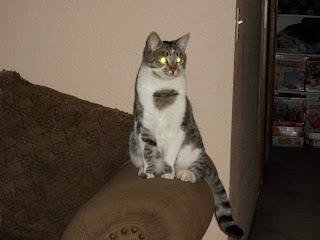 As I've mentioned before, the cat, my cat, Jack, has some kind of weird abusive relationship with this orange tabby from down the street. I call him The Orange. The Orange will come down to my house and pin my cat down and make a horrible mewling noise. This noise greatly disturbs my dog, and she goes crazy barking, but I can still hear the horrible sounds The Orange makes even over her barking.

It started up yesterday, and I opened the front door to find Jack huddled at the bottom of the steps with The Orange standing over him going "merow" "merow" merow." However, The Orange knows enough not to hang around when I come out, so he turned tail and ran. But, see, my cat can't just let him go. Jack always follows him anytime anything like this happens. And they go through bushes and crap that I can't go through, but I have to follow them so that I can get in between them, which gives The Orange a chance to run all the way off, and, then, Jack will come home.

But, yesterday, I didn't get around the hedge in time, because The Orange was really running much more quickly than normal, and Jack was chasing him, so I got around just in time to see The Orange turn on Jack and attack him.

You know how in cartoons when animals fight they always show these dust clouds with the occasional paw or whatever popping out of it. Now, I know why. This looked exactly like that. It was, like, three seconds of a squalling blur. And you know how they say "the fur was flying"? Well, I know where that comes from, too, because a great cloud of fur flew out in every direction, which only heightened the sense of them fighting in a dust cloud. I just stood there and blinked and wondered if I'd stepped into a cartoon. Then it was over, and The Orange was running for home.

I don't know if that means Jack won or not. He watched The Orange run off and, then, walked away. Actually, he came home with me and lounged around in the house for a couple of hours which isn't something he generally does at  that time of day unless it's raining. I couldn't find any wounds on him, although he can be kind of difficult with being examined.

The thing that disturbs me is that the owners of The Orange acknowledge that their cat is a bully (and I've heard complaints about him from other people in the neighborhood -- on the other hand, everyone in  the neighborhood loves Jack (heck, people come to my house just to see Jack if he's hanging out in the driveway)) and, yet, do nothing about his behavior or his comings and goings or anything. It would be one thing if Jack was going down to their house and these problems were happening, but, no, The Orange comes here, and I have to run him off (at least) a couple of times a day.

Which makes me want to sign Jack up for martial arts training. Or something.

I think I need to just get a towel that I always carry with me...
Posted by Andrew Leon at 10:21 PM