One of the things I decided to do in Shadow Spinner is to never deal directly with the evil. Which is not to say that there's not plenty of evil, because there is, but you don't ever experience it directly from the bad guy. You never see through the eyes of the Man with No Eyes (because, well, he doesn't have any, so that would just be weird). What this means in the story is that any time I needed to have a chapter from the perspective of the Man with No Eyes, you get that chapter from the perspective of his victim. I really rather like how all of this turns out.

Except, well, then there's chapter 16... Chapter 16 is different, because it needed to be between the Man with No Eyes and an ever bigger evil. I started out writing it from the perspective of the bigger evil because I was trying to hold to my rule of not having anything from the perspective of the Man with No Eyes. It just didn't work. You see, in the contest between evil and an even bigger evil, evil is the victim.

I like how "The Dark Tree" turned out, and it allows for some interesting insights. One day, maybe, I'll write the story of the Man with No Eyes and how he came to be, but, for now, you will have to be satisfied with "The Dark Tree." 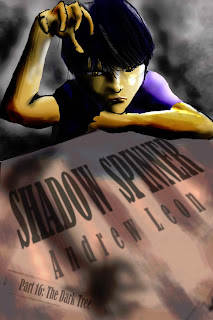 "Part Sixteen: The Dark Tree" is FREE! today, Monday, March 4 and tomorrow Tuesday, March 5. Make sure you drop by and pick it up!

Also FREE! today only:
"Part Fifteen: Food of the Garden"
"Part Fourteen: Anger and Laughter"
"Part Thirteen: The Clearing"
"Part Nine: The Shadow of the Tree"
"Part Eight: The Cold and the Dark"
"Part Seven: The Moth and the Shadow"
"Part Six: The Man with No Eyes"
"Part Three: The Bedroom"
"Part Two: The Kitchen Table"
"Part One: The Tunnel"
That's 11 FREE! parts out of 16! And that's not all!
Also, for FREE!, get the story that started it all:
"The Evil That Men Do"

And that's still not all! You can also pick up for FREE!, today, Charter Shorts! My creative writing kids are currently hard at work on Charter Shorts 2, so don't miss a chance to get this first one for FREE!

Email ThisBlogThis!Share to TwitterShare to FacebookShare to Pinterest
Labels: man with no eyes, Shadow Spinner, The Dark Tree, Tiberius