Okay, so you've collected your cards, and you've built your deck, now you need to play the game. Now, it's time to win! Right? Right! That's what this is all about.

There are two basic schools of thought about winning at Magic:
1. It's the deck.
2. It's the player.
As with most extreme positions, it's a combination of the two. The best player in the world can't win with a crappy deck, and the best deck in the world isn't going to help a crappy player. But, since we've dealt with the deck building (on a very superficial level), let's deal with the crappy player. Um, I mean, let's deal with playing the game.

There are, of course, too many different deck types and styles to go into any specific detail about how to win with any particular deck, but there is one general reason why people lose with even the best decks possible. That reason is bad timing. Yeah, playing Magic is more than a little like being good at telling jokes. Jokes are all about the timing, too. But, then, so are books.

Here, let me give you an example:
There is this card: 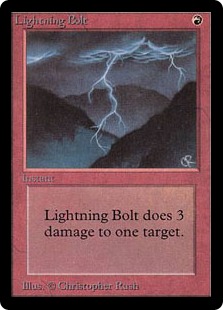 Before this card was removed from the game, it was the most common first turn spell in the game. I'm just gonna say that there is no reason to throw a "Lightning Bolt" on the first turn of the game. That's what's called bad timing. Despite its appearance, the bolt is a very versatile card, and using it on the first turn is a waste of something that could turn out to be more useful later on.

In similar fashion, players of blue tend to be very prone to using 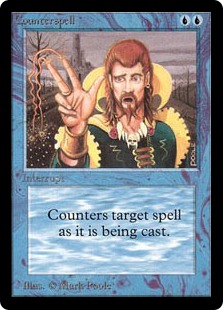 at their first opportunity. I don't know about you, but the first spell I play is never my best card, so you wasting a "Counterspell" on it only helps me out. What I really used to love watching in tournaments is when someone would throw a "Lightning Bolt" on his first turn, and the other player would counter it. The most amusing thing about that was that one of those players was still gonna win.

So I want to jump back to my "Mr. Suitcase" example from the last post. Specifically, I want to talk about Mr. SouthLA. He waltzed into the store sometime during the summer of '94, literally, with a briefcase full of the top cards. I'm talking, like, 20 or "Black Lotuses" and everything else that implies. He had just moved up from south Louisiana to open a law office. No, I don't actually have any idea whether he was a good lawyer or not, but I will say I would never have hired him based on his Magic skills. Or lack thereof. See, he thought that merely the fact that he owned all of these cards that rest of us could only salivate over (it actually took me a really long time to build my complete collection of Beta/Unlimited and Arabian Nights (because we never got those sets in Shreveport, and it didn't take long before they were impossible to order) made him the best player in the city.

Oh, how wrong he was.

See, he had a timing problem, and, although he could build decks that only the rest of us could dream about, he didn't know how to play them. He never really got it, either. The fact that he had all of  these amazing cards often allowed him to play through his whole hand, or pretty close to it, on his first turn. The problem was that, once he'd done that, he had nothing left to play, and everyone knew it. There was no reason to wonder what he might have in his hand or anything, because we all knew he had nothing.

Of course, he started complaining that it was the fault of his deck. So he and I did a little experiment. We switched decks. Let me make it clear, here, that my decks were mostly composed of common cards. There were a few rares here and there but, mostly, commons, and I would just beat the stuffing out of him, and he couldn't understand why. I mean, his cards were better, right? That must mean his deck was better, too? Okay, his deck was pretty good. Anyway, we switched decks, and I proceeded to kick the snot of him with his deck. Which made him mad, so we switched back. And I knocked the stuffing out of him. I'm sure you get the idea.

The point is that winning at Magic is not all in the deck. It's also in the playing of the deck. The biggest issue most people have with being effective players is patience. You can't just play through everything in your hand as you draw it. There's lots of waiting and knowing when to use specific cards.

Which is a lot like writing. It doesn't matter how good your story idea is if you don't know how to plot it out. You can't just throw everything at your reader at once and expect people to want to keep going.

A while back, I read this particular paranormal mystery book, because, for some reason, people love the series, and I figured I may as well see what was up with it. Did I say it was a mystery? Well, that's what it said, anyway. So I was reading this nearly 300 page long book, and I hit about page 85, and, bam!, there's the killer revealed right there. But I'm thinking "no way" because I'm only on page 85, and there's no way she'd just lay it right out there for us and in front of her protagonist, too. So I kept reading, and it was increasingly apparent that I'd pinpointed the killer, but I kept thinking "no way" because it couldn't be that easy, right? There must be some kind of twist that I couldn't see coming! These books were popular, so it just could not be that easy. Her protagonist could not be that dumb, right? Well, it was that easy, and her protagonist was that dumb, and I never read another one of those books. And I'm still not sure how, after reading that first book, anyone would ever continue on to read a second one. At nay rate, the author cast her "Lightning Bolt" on the first turn and, then, continued to play through everything in her hand in the same way until she had nothing left to play but 200 pages left to write. It's the holding back that keeps the readers reading, not the giving away.

Like telling a good joke, timing is everything. In Magic and in writing. Seriously, I always loved when my opponent would go first and hit me with a "Lightning Bolt" on his first turn, then, on my first turn, I'd drop a 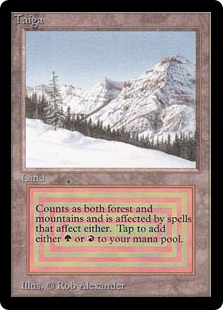 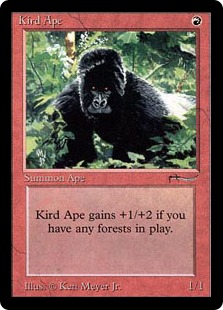 Here's the thing, people don't fear an empty hand. Because I was known for holding back, for always having something ready, I was able to win games even when I had a big hand full of nothing. They'd hold back in fear of what they were scared was in my hand; all it took from me was, "Are you sure you want to do that?" That's the same kind of feeling you want your readers to have. You want them to have that tension over what might be coming, even if what's coming isn't really that bad. It's the tension that keeps the reader going, and it's the release of tension, the relief or the horror, that gives the reader enjoyment.

Contrary to the evidence I've given (with the Kird Ape deck), my favorite types of decks were the ones that were slow builds and allowed me to control the game.  As a writer, I want to control the game in the same way. Keep the player going just enough to allow them to think he had a chance and, then, slam! killing blow! I mean, keep the reader going... yeah, that's what I meant. 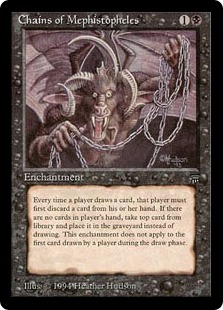 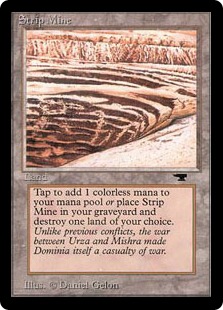 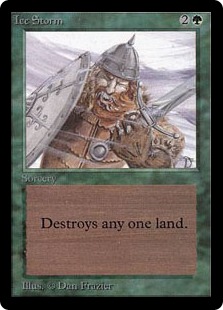 Land destruction was always one of my favorite deck types. 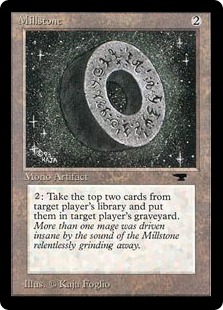 As were decks designed to do away with my opponent's library.
Posted by Andrew Leon at 9:57 PM