It's softball season again. For my daughter, that is. Well, for all of us by extension. The fact that she had her first practice this past Saturday was all she talked about last week. About the fact that it was coming up, not that she'd been to her future practice and was talking about it, although that would have been pretty cool, because, then, she could have gone to practice twice, and she would have loved that. Practices this year are at the most inconvenient times possible for us, which has meant, for starters, rearranging her accordion lessons.

Practice is also much more organized this year due to her leveling up. Or, maybe, it's upgrades? No, I'm sure it's "Level Up!" She's a "10 and under" this year instead of an "8 and under." Her team name, though, took a hit, and she's gone from being one of the "Dragonflies" to being one of the "Ducks." I don't know about you, but I can't, in my head, associate ducks with softball. It's probably because of those movies, but I just can't do it. Although... maybe there was a Donald Duck cartoon with him playing softball? I can't remember. Maybe, I'm just thinking about the wrong kinds of ducks...

Like I said, her first practice was this past Saturday. I wasn't there for the whole thing (because I had to make a coffee run (9am softball practice requires coffee for adults (just sayin'))), but, from what I saw, she's easily one of the best (if not the best) catchers on  the team. Keep in mind that she hasn't picked up a softball since a few weeks after the season ended last year. That's, probably, my bad. I intended to facilitate her keeping up with her skillz during the off season, but, man, it's tough to hold that in my head with all the other stuff that's in my head, especially when it's not something that's happening RIGHT NOW, like it is now.

Opening day is about a month away. I don't watch sports, but I am looking forward to her games starting back up. I'm sure there will be progress reports.

The kids are also out of school this week. Well, two of them are. It's just their school, though, so this week promises to be one of ambivalence for me. On the one hand, I don't have to the school routine for the younger two, but I will still have to be up at 5:30am for the oldest one two of those days, because he does have school. And, since it's just their school, all of my daughter's neighborhood friends will be at school, so she'll have no one to play with, which means she'll be in the house all day bugging me or fighting with her brother neither of which is happy making for the writing. Or anything else. But, you know, no school routine. If I quit posting after this week, you'll know it's because my head exploded.

In other news, today is "Part Fifteen: Food of the Garden"! 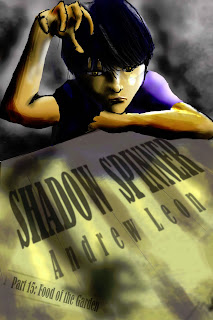 Tib gets hungry, and he's in a garden! But, well, there are... issues.
It's FREE! today, Monday, February 18 and tomorrow, Tuesday, February 19 for the Kindle or Kindle App. Make sure you stop by and pick up your copy. I'd say to click the little "like" button, but those seem to have gone missing from Amazon; I'm wondering if it has to do with the lawsuit against facebook over their "like" buttons, but I haven't seen anything about it anywhere.

Also, FREE! on Monday:
"Part Fourteen: Anger and Laughter"
"Part Thirteen: The Clearing"
"Part Twelve: The Gash in the Floor"
"Part Eight: The Cold and the Dark"
"Part Seven: The Moth and the Shadow"
"Part Six: The Man with No Eyes"
"Part Two: The Kitchen Table"
"Part One: The Tunnel"
"The Evil That Men Do"