Some anger:
My younger son just finished reading Animal Farm for school. He loved it and hated it. At one point, he became so angry at what was happening that he threw the book across the classroom. Well, not all the way across, but he threw the book. I applaud his outrage over the depredations of Napoleon. The interesting thing to me is that of the kids in his class, only my son and one other kid grew upset over what was going on in the book, and that outraged my son even more. He kept saying to his friends that Napoleon was evil, and they couldn't understand why he was saying that. Right up to the very end. I think this may be very indicative of our culture, because all the kids expected it all turn out okay in the end and, really, Napoleon was just trying to do the right thing. It's interesting and more study should be done about this.

As a side note, I don't remember there being any issue among my friends with understanding the book when I read it in middle school. Now, I'm curious if that was a product of my school (smart kid school) or a product of my generation. I think this question is coming to me about 30 years too late.

Some laughter:
Well, actually, I'm just still laughing over "It was a sock," but, because I'm a nice guy, I'll give you something else to laugh about:


And, now, the chocolate:
Remember, Wednesday is the deadline for submissions in the Great Chocolate Contest. Briane Pagel has a great story in the works, but I'd hate for him to win by default... even if he does say he's going to win anyway.


But, now, the real "Anger and Laughter"! Today is the FREE! release of the newest piece of Shadow Spinner: 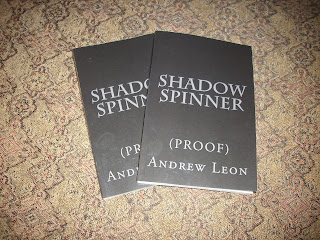 Yeah, those are the proof copies, one of which someone should be winning very soon. Only three in existence! My son temporarily has the third one. But, anyway, today, Monday, February 4 and tomorrow, Tuesday, February 5, "Part Fourteen: Anger and Laughter" will be available for FREE! You can't beat that price is all I can say. To go along with the FREE! release of "Anger and Laughter," I also have FREE! today only:
"Part One: The Tunnel"
"Part Six: The Man with No Eyes"
"Part Seven: The Moth and the Shadow"
"Part Twelve: The Gash in the Floor"
"Part Thirteen: The Clearing"
Tell your friends, and don't forget to click the little "like" button. That would be awesome!
And, if you've read "The Tunnel" or any of the other parts, it would be great if you'd feel lead to leave a short (or a long) review.
Posted by Andrew Leon at 10:39 PM

Email ThisBlogThis!Share to TwitterShare to FacebookShare to Pinterest
Labels: Anger and Laughter, Animal Farm, Bill Cosby, chocolate, Gash in the Floor, George Orwell, man with no eyes, Part Seven: The Moth and the Shadow, poop, school, Shadow Spinner, The Clearing, The Tunnel