It seems that every few months there will be a string of blog posts about how blogs are dying. I've seen at least three in January, one of them by Nathan Bransford. This worry about the "death" of blogs kind of interests me, because it's so irrational. But, then, most fears are irrational. And emotional (and, if you've been following my "thinking" series, you'll know where emotions can get us).

The truth is, I have no idea about how blogs are doing in the overall landscape of the Internet. I do know, though, that they are not going away. Blogs are, at this point, an integrated part of the Internet and some have gotten so big and pervasive that we no longer even think of them as blogs. Which doesn't change the fact that they are. People just don't treat them that way anymore, so it sort of removes them from the blog landscape in our minds, thus shrinking our own, personal blogosphere.

Here's the real issue as I see it: it's a matter of perception. See, the blogosphere is a constantly changing landscape. It's kind of like this exhibit that was at the Mid America Science Museum, a hands on museum, when I was a kid. It was this topography thing, sort of like a big box of dirt, that you could make mountains and rivers and stuff in. There were water pumps on the side to run water into it, and air pumps to make mountains. The thing is, though, that you had to keep working the pumps to keep whatever it was you were doing operating. If you stopped with the water pump, the river would dry up, and, if you stopped with the air pump, the mountain would slowly shrink. That was kind of the point, too, to show how those things eroded over time. But all of that is kind of how blogs work...

When you're working on your blog, posting (interesting things) regularly, visiting other blogs and commenting, responding to the comments on your own blog, it's like working that air pump and the mountain that is your blog rises. As soon as you stop doing those things, your personal blog landscape begins to shrink. It has nothing to do with how the blogosphere overall is doing, but, since your own landscape is shrinking, it feels like everything is shrinking.

To continue to use Mr. Bransford as an example, he was complaining about how his comment count is down. Well, I would suspect that that is because he rarely responds to comments. When I first started blogging, I was pointed at his blog as being, like, the epitome of the writing blogs, but I have found it to be far from that. Sure, maybe there was a time when it was. A time when he was actively working on his blog. However, I found out very quickly that he doesn't respond to comments. Doesn't even acknowledge his commenters, so, even if I have something to say, I don't comment on his blog. In fact, his posts are so erratic, both in how often he does it and in the content therein, that I rarely click through to see what he has to say anymore. When I do, I generally come away empty-handed, so to speak. I'm not even sure why I have not stopped following him other than that I haven't taken the effort to remove him from my list.

He was also saying how many of his old blogging buddies no longer blog. Well, sure, that happens. The newness of blogging wears off, and many people quit, but there is a fairly steady stream of new people coming into it, so, if you are even somewhat active in your blogosphere, there are new people to meet that replace the old ones that move on to other things. But, if you're not active, not seeking out new worl..., um, people, blogs, your world slowly shrinks as people leave. This seems to be the situation with our friend Nathan. So, yeah, it seems like, to him, blogs are dying.

Now, after having used Nathan Bransford as an example, I have to say that I don't actually know him, and I don't know what his blogging habits are. Maybe, he does visit as many blogs each day as Alex (our IWSG creator); I don't know. My statements are purely reflective of the comments he made in his post about dying blogs and what I thought of as I read them based upon my perceptions. And they are my perceptions.

Honestly, there probably are fewer people blogging today than there were five years ago, but, five years ago, people thought blogging was some kind of "get rich quick" scheme. When that turned out not to be the case, those people trying to strike gold by blogging left. But, then, those people were never really involved anyway. They thought they could just throw their crap into the air and it would come back down gold bricks. "If you blog it, they will come," so to speak. But that's not how it works.

Anyway... all of  that to say that you get out of it what you put into it. There are more than plenty of active bloggers, and the blogosphere is a vibrant, living landscape, whether it's smaller now than it used to be or not.

And none of that has to do with my own insecurity about blogging. I'm not insecure about a lot of things, and I'm insecure about almost nothing that I have control over. For instance, I'm not insecure about whether my writing is any good or not. On the one hand, I know that it is; on the other, it totally doesn't matter as long as I'm satisfied with it, which I am, so I have no insecurities there at all. However, I have no control whatsoever about traffic flow to my blog...

Okay, yeah, that's not the truth, because, like I was just saying, if you're involved and all of that, you'll get people coming over to check you out just because you're involved. BUT! But... My traffic has been steadily increasing over the past couple of years to the point where my daily traffic is as high as what I would get in an entire month when I first started. That's good! Great, even. But I do worry about sustaining it. Every month, I have anxiety as the month begins as to whether I will retain the traffic flow of the previous month, and I don't always do that. There are some months with some pretty steep drops. But, overall, it goes up, but, overall, I can't keep myself from fretting about it for about the first half of each month. Of course, that's part of what drives me to be involved, so I guess it works out.

So there you go: why not to worry about blogging being on the way out and why I worry about my blog traffic anyway.

Reminder:
Today is the last day for submissions for the Great Chocolate Contest. If you have an entry, post it on your blog and leave me a link, OR email it to me. Either is fine. For those of you that post them, I will leave links to the various stories tomorrow (or Friday at the latest). Thanks! And may the best chocolate in the world (that I've ever tasted) go to the best story!

Oh!
And I almost forgot!
As a special birthday present to all of you out there (that don't already have it), "Christmas on the Corner" is FREE! today! Drop by and pick it up! (And click the "like" button!) 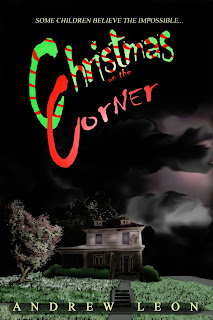