So... following on the heels of all the discussion about reviews is... a review. And, probably, this is one I should have gotten to a long time ago, but I have a huge stack of books waiting to be read, so it took a while to get to this.

Alex Cavanaugh is pretty well known in these parts and not without reason. Not only has he written a couple of best selling books, but he's incredibly supportive of other writers. His name gets around. But we're not here to look at the author but his book. His first book, that is: Cassastar. 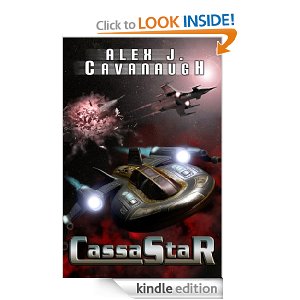 As usual, let's look at the technicals first:
This is easily one of the best edited small or independently published books I've seen. In the top 3, for sure. I wouldn't know more specifically than that without going through those three books and actually counting up the errors, and I'm not going to spend the time doing that. Although there are a few more toward the end than in the beginning, except for one consistent misspelling of a word by substituting in a homophone for it, all of the mistakes were just things that got missed, like "as" instead of "a" or things like that. There are no consistent punctuation errors at all. Without the rather routine editing issues I've come to expect from independently published works, this became a rather enjoyable read for that alone. I'd give it an A on technicals.

Without getting into the actual plot of the book, I'd say it's a fairly routine space romp. Think Top Gun meets A New Hope with a dash of Battlestar Galactica thrown in for good measure. Of course, Alex does add in his own bits, too, such as the telepathic abilities of the Cassans (and possibly other, more rare, mental abilities that we don't encounter during this first book (well, we do encounter one other, but that would be telling)), and those abilities play a role in what unfolds with the plot, so they're not just icing on the cake, so to speak.

At any rate, the plot is not very complicated or unpredictable, so, if you're looking for some big twist ending or endless convolutions in your plot, you should look somewhere else. Plot-wise, you're going to get a fairly straightforward story. The only real issue with this is that Alex waits to reveal the conflict, or that there is any conflict, until well after the first third of the book. It left me feeling somewhat adrift during Byron's training because it was impossible to tell that anything else was going on other than boot camp.

Of course, the plot is not the point of the story. Cassastar isn't about an interstellar war, it's about the characters, and Mr. Cavanaugh does a very realistic job of drawing his characters and fleshing them out. In fact, there is real character growth in the book, which is not something that's all that common in these days of flashy, all out action all the time. Byron is not the same character at the end of the book as he starts out being. Neither is Bassa. The book is about friendship and how "iron sharpens iron;" the plot is only there to facilitate that journey. In this respect, the book often reminded me of the relationship between Frodo and Samwise in The Lord of the Rings. It's all very British feeling.

It's a solid job of story telling. Good characters. Good action. A nice, entertaining read. There's enough to it to make it above average, and, coupled with the lack of grammar issues, I'd give it a nice, solid "B." It's not great or earth-shattering, but it is good entertainment with some insight into "humanity" thrown in to make it worth the time.
Posted by Andrew Leon at 10:12 PM