Do you ever have those moments where you realize you've forgotten something or mislaid something or, I don't know, lost a child? I know someone that did that, lost his child at Disneyland because he forgot she was with him and just walked off and left her. There's that moment of panic that sets in when you realize that you forgot. It's a horrible moment.

Until today (Sunday, July 29, 2012), the worst experience I've had with this was forgetting about my creative class one day last school year. It's not that I forgot the class itself, I just forgot what day it was. I was busy writing, what can I say? I was being very cognizant of what time I needed to leave to pick up my kids from school, but, about half way through class, I suddenly realized "oh crap! it's Thursday I'm supposed to be teaching class!" That was a moment of panic.

Mostly, I don't have those, though. I've never forgotten to pick my kids up from school or anything like that. When I used to wear glasses, I would have those moments where I'd wonder where my glasses were while I was wearing them (no, I didn't switch to contacts... it's a long story (okay, not that long, but I'm not talking about that, right now)), but, really, I'm pretty good with remembering things or, at least, knowing that I'm not remembering and asking. I've never even forgotten birthdays, or, um... anniversaries.

Well, until now, that is.

I realized this morning... well, I was reminded this morning (remember, this is Sunday morning) that it's my wife's step-twins' birthday is today. That's not a big deal. The problem was that as I was being caused to remember their birthday, I had the sudden realization that their birthday is after my wedding anniversary. It's after our anniversary, and my wife and I hadn't done anything for it. Or even mentioned it. Or talked about anything about it all month. My immediate response to realizing that I'd missed our anniversary was an interior "oh, crap!"

Because, see, my wife hadn't mentioned it. She also didn't seem mad. I didn't know what to do. I mean, had she also forgotten, or, as I thought was more likely, had she remembered but not said anything because I hadn't said or done anything. Was it a test? This was bad! What the heck do you do in that kind of situation?

I briefly considered just not saying anything. I mean, you know, if she had forgotten then everything was cool. But, no, because if it was a test of some sort, the longer I went, the worse things would get. And if she had forgotten but remembered and I still hadn't said anything... I had to bite the bullet. That's all there was to it.

We go out for coffee on Sunday mornings. It's the only time we have without the kids all week, and that's what we do together. We drove over to the coffee shop to get our Aztec mochas (you can read more about the whole Aztec thing here), and, as we got out of the car, I said, "I realized this morning that I've forgotten something," to which my wife responded, "What did you forget?"

That wasn't a very good response for me. So much for fishing for information, right? So I start trying to explain to her about remembering what I'd forgotten without actually telling her what the thing was while I tried to figure out if she knew, and she just kept saying to me, "What did you forget?" until I finally said, "I realized that we missed our anniversary." My wife kind of stopped, like she got stuck for a moment, and then said, "What?" I could see her figuring out days in her head until she finally asked the date and then she kind of didn't believe that we'd missed it and tried to tell me that I was wrong, but I reminded her that it was the twins' birthday, which is after our anniversary, and, then, she couldn't remember the date of our anniversary to figure out when we were supposed to have celebrated it.

So I got points:
1. Because I remembered first!
2. Because I knew when it was supposed to have been!

And, then, she said, "What does that say about us?"

Which is a good question.

And I didn't really have a good answer except that I finally answered that it says we have very busy kids, which we do, and it's so difficult keeping up with all of their stuff that we can't remember our own stuff. Which is actually true. But, still...

We forgot our anniversary. Both of us.

However, I went out Sunday afternoon and bought some good food and cooked her a great anniversary dinner for Sunday night, and that was nice. Even if we did have to share it with 2/3 of our children.

My wife's final response was, "Well, at least it wasn't our 15th or 20th that we forgot, right?" And that's true, except that we still have the opportunity to forget those. I'm trying to figure out ways to drill this into my head, now, so that I can remember not to forget next year!

I still say boarding school is the answer...

Note:
Don't forget to pick up your FREE copy of chapter one of Shadow Spinner: "Part One: The Tunnel" for your Kindle or Kindle app! "Part Two: The Kitchen Table" will be coming soon!
When you pick it up, please click the "like" button. After you read it, a short review and rating would be awesome! Thanks in advance! 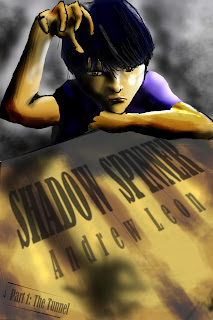