Last week, I went on vacation. In many ways, it was the first real vacation I've ever been on. Not that I've never been on a vacation before; there was my honeymoon almost 14 years ago, but, for some reason, a honeymoon doesn't feel like a "vacation" to me. And there was one other family vacation about 6 years ago, but that one, also, did not feel like a vacation. Probably because my kids were too young. I took them on vacation, but I didn't get one out of that deal. But this one... this one was good. 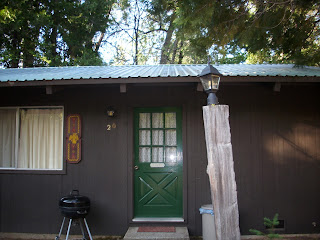 Our cabin, which is, evidently, their "best" cabin, although we didn't know that ahead of time. 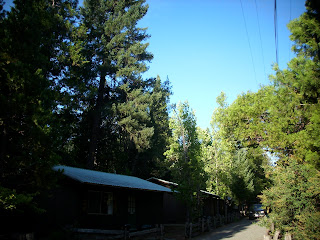 The view up the road to our cabin which is down at the end. 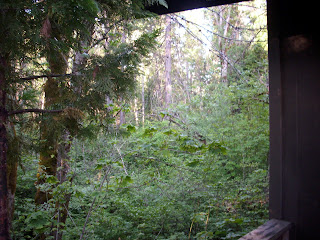 The view out of our bedroom window. 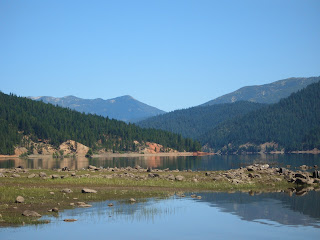 The general area as seen from the lake.

I'm not really much for camping. I'm sure that goes back to a traumatic camping event from middle school (story for another time (yeah, I know I'm always saying that and never getting to those "another times," but no one ever reminds me!)), but I've discovered that cabin camping is pretty good. Actually, it was kind of the only way I would consent to go camping. Not that I said it that way, and I would have gone even without renting a cabin, but I wouldn't have really enjoyed myself. In the cabin, though... it was good.

And there was a deck with a picnic table and, down below it, a creek. We kept the window open in the bedroom all the so that we could hear the creek at night. Oh, it was so nice. And sitting out on deck in the mornings with my mocha (sometimes while writing) was... incredible. Other than being repeatedly interrupted by one of my children (who shall remain unnamed), it was possibly the most peaceful thing I've ever experienced. 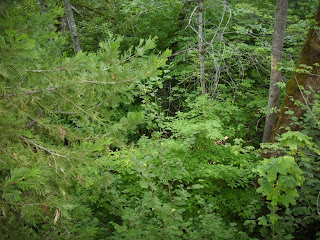 A view down to the creek from the deck. Yes, I know you can't see the creek. Listen carefully, and, maybe, you can hear it.

So that's the overview. Tall trees, big mountains, bubbling water. No Internet. No outside connections at all. That's a nice thing about not owning a cell phone or iDevice. And no withdrawal symptoms, either, which was somewhat surprising but not at all unpleasant.

Yes, yes, you may envy me now. We are tentatively planning to go back next year. I'm already looking forward to it.
Posted by Andrew Leon at 9:58 PM