In my last post, I interviewed the guys, Bryan and Brandon, from A Beer for the Shower about their new book, The Missing Link. 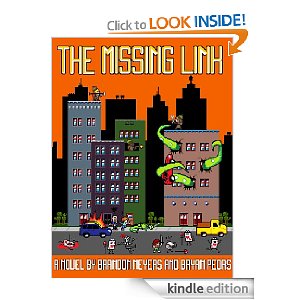 Oh, the cover... I love the cover! Back in the 80s, I used to play Rampage upon occasion, and this cover, which is reminiscent of that game, is totally appropriate for this book. It might look kind of goofy, but, considering the book is about technology and rampaging monsters, it totally works.

The Missing Link is probably not a book for everyone. Not that any book is a book for everyone (although there are two books I think everyone should read), but this book is even less a book for everyone than most books. Mostly, I just think a lot of people won't "get" it. A good test to see if it might be for you is to follow the above link over to their blog and read a few of their posts. If the humor doesn't grab or turns you off, the book is not for you. However, if you find yourself laughing despite yourself, even if you hate yourself afterwards, you should give the book a chance, because it's full of the same humor and crassness as their blog.

The technicals: The front half of the book is marvellously edited with hardly a misplaced comma. Well, except for that pet peeve of mine with commas following a sentence starting conjunction and an independent clause behind. This seems to be a fairly widespread error in comma usage, and I'll browbeat the boys about it later. Other than that, though, the front half of the book is almost squeaky clean. Definitely "A" work, and there were hardly any red marks on their paper when I got finished with that portion. However, the further through the book you go, the more errors crop up. Missing words or mistyped words, like "than" instead of "that." A few incorrect tenses here and there. Unstable formatting, mostly in that the indentations start wobbling back and forth. It's enough to drop the technical grade down into the high "B" range. Still, everything considered, it's a pretty good job and nothing that should give anyone any real problems. Especially the commas. There aren't a whole lot of other people out there that are likely to notice any problems with them.

As for the book, well... I don't like to actually talk about what the books I'm reviewing are about, because you all are quite capable to read that stuff for yourselves. However, I feel compelled this time. Bryan and Brandon give us a look at the chaos that could result from a technological collapse in society. My feeling is that most people looking at the book will think that their take is a bit extreme, outrageous, and over-the-top. I'm not so sure...

Just within the last couple of weeks, I was reading about some problems at some hotel chain or other (I forget which one, and, honestly, it's not important). At two of their hotels (one of them was in Hawaii, the other somewhere on the main land), they had a computer issue which caused all of the guests to be locked out of their rooms for several hours (6-8 or something like that). The hotel uses key card locks, and the computer locked down all the rooms, and no one could open them (this should be a lesson to have manual back-ups available for the staff). Really, this should just be a minor annoyance. Yes, an annoyance, but nothing worthy of violence. Within the first hour (maybe half hour?), police had to be called in because of brawling in the hallways. Widespread brawling. Not, like, just one fist fight. People freaked out and started beating each other up because they couldn't get into their hotel rooms. What the crap? Seriously. What the crap?

So, when violence breaks out in The Missing Link over the loss of the Internet, I can hardly say that the boys have exaggerated.

The characters in the book are largely stereotypes, but they're not the kind of stereotypes that happened because the authors didn't know what they were doing. They're there to give the readers something easy to latch onto, "oh! I know what this character is like!" And, as they said in the interview, they are more caricature than cliche. They're magnified examples of people, but, also, they're there to show us that people are capable of going beyond our stereotypes for them. I'd be hard-pressed to choose a favorite. (Although, I have to admit, I have a lot of empathy for Brent and the blank looks he gets any time he tries to explain anything.) Okay, I'm lying, I love Sir McAffery. Not so much his character within the book, but just the concept of his character. It's genius. And I would say more, but I can't do that without ruining elements of the story.

Also, I love the Alice in Wonderland elements of the story. Admittedly, I was bit put off by it right at first. Molly's experience in going down her laundry chute follows Alice's trip beat for beat, but, as you get into the story and see the analogy at work, it does. Work. And it's a great analogy (as they said in the interview). The Internet is a Wonderland, but it's not a Wonderland that's a paradise. It's insane. Even more insane than Lewis Carroll ever could have imagined. The melding of Carroll's work with other familiar pop culture phenomenon like World of Warcraft and The Wizard of Oz is pretty clever, and I really enjoyed it.

So here's the thing: go over and check out their blog. Do that now. If you like it, buy the book. It's only a buck. It'll make you laugh. Yeah, there are some parts that seem a bit absurd, but, you know, like the deal with the hotel I was mentioning? I'm not so sure that they are. Bryan and Brandon have actually offered up a fairly powerful piece of social commentary, and I think people should really stop and take a look at it. How dependent are you on your iGadget? Is your dependency healthy? Maybe think about spending some time away from it. In fact, put it down right now and go download the book. Oh, wait, you need it to download the book? Curse you Internet!

My grade? I give it an "A-." It's clever. Well told. Interesting. The only thing that drags it down a bit is that they do sort of run a few of the gags a bit too hard. And there are a few redundancies toward the end, but it's just a few. Overall, it's a very enjoyable read with an actual message trapped in there. I'm sure they tried to hide to keep their reputations intact.

Twiddledum loves this!
Posted by Andrew Leon at 1:49 PM