Let's go for a walk... Part 2: The Troll Bridge and the Dragon Crossing

I think my family is not like other families. That's my suspicion, at any rate. Of course, I have no empirical data to back this up. However, I am the frequent recipient of comments such as
1. I wish my kids were as smart as yours.
2. I could never eat the way you do (i.e. giving up sugar).
3. How do you manage to bike to school with your kids every day? I could never do that.
[Although, to be honest, there has been a biking hiatus going on since we got the dog. Not really because of the dog, not at this point (although it did start out that way). My bike just needs some work. Specifically, the brakes. Because it's not a great idea to bike when your brakes don't work. I'll get to it! Really, I will.]
Knowing all of that, though (and I have always known it and taken it for granted (because I was always different as a kid, so I'm used to that whole thing)), has never really made me think about it. Not until my daughter's big "we have a new house Halloween sleep over party" back in October. (Yes, I've been holding onto this post (in my head) for almost three months. That's just how I do things (there's always more in my head than I have time for).) As of Halloween weekend (since Halloween was on a Monday, it counts), we'd only had the dog 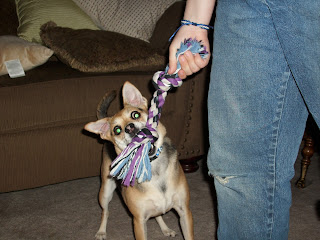 (remember her?)
﻿for a week. Walking the dog was still an occasion for a (whole) family outing. Pity, that is no longer the case. But my daughter is an... issue.
She's always the quickest to say, "Yeah, I want to go!" But she's also always the quickest to say, "Can we go home now?" This doesn't just apply to dog walking. She's just an on-the-go kind of girl, and she's always ready to move on to the next thing. In an effort to engage her more in the walking experience, things started coming out of me, the first of which was, "But we can't turn around... I have to take you and throw you to the trolls at the troll bridge!"
Her response was, "Why are you going to throw me to the trolls? What about them?" (them meaning the boys)
What interests me about the exchange is the automatic acceptance that there was, in fact, a troll bridge. And not just by her but by the whole family. And, of course, then, the kids wanted to see it, which they hadn't before (my wife and I have been using the path for biking for a few years, so we're familiar with a goodly portion of the trail but especially the portion near where we now live, so we already knew all about the troll bridge). 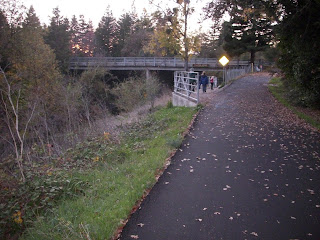 from a distance, my family approaching the troll bridge (despite the warning that the trolls would eat them up)
﻿ 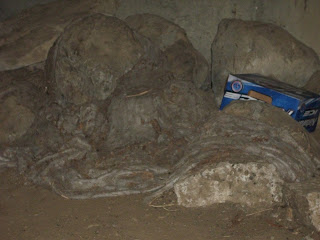 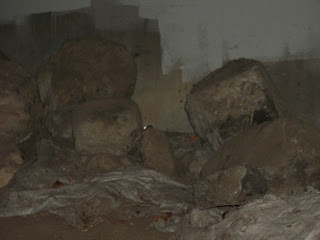 Then, it got dark. When it's dark, of course, you can see the flames of the dragons crossing the bridge. Unfortunately, I haven't been able to get a picture of this that looks like anything other than blurry dark, but it's very impressive, the dragons racing back and forth across the bridge. My daughter wants to know what they're doing racing around like that, so I told her she should go ask them. So far, she's resisted the temptation to do that. She may not be scared of trolls eating her, but, evidently, she is scared of being eaten by dragons.
And this is where it gets complicated and the apparent difference between my family and other families becomes noticeable (which is not to say that there aren't others of you out there with families like mine):
Saturday morning of the great sleep over, after I fed all the girls and the dog, I needed to take the dog out, because that's what you have to do after feeding a dog unless you want to have to do extra cleaning in the house. My daughter asked me how far I was going, and, without thinking, I responded, "probably to the troll bridge."
The other girls immediately got all excited. "You have a troll bridge?" "We want to see it!" "Can we come?" So my daughter started boasting about the troll bridge and the dragons that cross it, and the girls wanted to see the dragons, and I had to explain that you can only see the dragons at night. At any rate, from all of the... well, for lack of a better word, conversation, I realized that the idea of a troll bridge or dragons or, well, pretty much anything fanciful of this nature was pretty foreign to the other girls. Not that they hadn't heard of these things, they just weren't part of their everyday vocabulary. It just wasn't the kind of thing they get in their homes. So... I took them with me. Against my better judgement.
It was quite the adventure, and, honestly, I'm surprised I can still hear. I'm also surprised that we didn't get complaints from the houses off the trail. Or in the next county.
I did make one mistake. Well, it was less of a mistake than failing to think the whole thing through before agreeing to bring them along. See, homeless people often sleep under the bridges at night, and we were well on our way before it dawned on me that I couldn't actually take them down to the bridge, because it was early enough that there might still be people sleeping down there (my wife and I often see them when we bike through). Not only did I not want this gaggle of incredibly loud girls to wake them up, but I didn't think the other parents would appreciate me taking their 8-year-olds to gawk at a bunch of homeless men sleeping under a bridge. I also want to say, at this point, that in no way did the troll bridge idea have anything to do with homeless people. At any rate, I had to announce to the girls that I would only take them far enough to see the troll bridge, but I couldn't take them down under it.
The oldest girl (the only one a grade ahead of my daughter (the others were from her grade)) wanted to know why, so I explained that sometimes there were people sleeping under the bridge, and I didn't want to wake anyone up. Her response was, "Oh! So you call homeless people trolls!" Wonderful. I couldn't wait for that bit of information to go home with her and whoever else may have been listening. And, you know, there's no point in trying to explain. I know, I tried. She went back to singing the "squirrel club" song (that my daughter started the night before) as soon as the words left her mouth, and I'm pretty sure she didn't hear a word I said.
In the end, we didn't actually quite make it even close enough to see the bridge. Not really. We only made it as far as Jumping Jack Flash. He was kind of scary to several of the girls, and I wasn't quite sure he wouldn't be able to jump over the fence (I'm still not completely sure he won't one day come over the fence, but, back then, I was really worried about it). You can just see where the bridge is from there, but you can't really see it. I turned them all around, and we headed home. I think they got over their disappointment at not getting to see the trolls.
Still... it was the first thing out of the mouths of several of the girls when their parents came to pick them up. (And I heard about how much I scared several of them by telling them the story "The Masque of the Red Death" before bedtime later in the week. But (mostly) in a good way. No one was mad, at any rate.) I suppose I provided a pretty scary Halloween sleep over between the two things.
But to get back to the point, not that I've really strayed from it. Much. Okay, to make the point: these kinds of things are fairly typical around my house. We have all kinds of landmarks and stories about things on the trail (more about Jumping Jack Flash later), and this is all normal to us. It doesn't seem to be normal elsewhere. I think that's kind of too bad. In some ways, everyone needs a troll bridge.
And the threat, "We're going to sell you to the gypsies..."
Posted by Andrew Leon at 4:18 PM