Unexpected Applause: The Greatest Xmas Story Ever Told [plus news and a smart cookie]

Back in December, Briane Pagel of Thinking The Lions wrote a short story for a contest. The problem here is that when the contest said "short," it meant short. The word limit was a measly 500 words. Briane couldn't do it. Instead, he wrote a serialized story on his blog over about a 10 day time period at 500 (at least) words a day. I didn't count. And what came of it is "Santa, Godzilla, and Jesus Walk Into A Bar...", a/k/a The Greatest Xmas Story Ever Told (By Me). Yes, even the title is a mouthful (the general consensus is becoming that Briane can't say "hello" in under 1000 words (which makes me wonder what he'd be like subtitled (go watch Wayne's World 2 to get an idea of what I mean)).

Does SGJWIB have flying couches or falling whales? No, but it does have carnivorous trees, and that's saying something. It's also saying something that it really is a Christmas story. Or Xmas, as Briane says it. Or, really, an origin of Xmas story. Except a sci-fi, futuristic story that somehow takes place in the past so that it is an origin. You know, "A long time ago in a galaxy..." No, wait. "A long time ago, right here on Earth..."

Somehow, Mr. Pagel manages to weave all of the essential elements of our Christmas traditions into a linear story. There are the trees, mistletoe, Wenceslas... I think he missed the wise men, but he gets a lot of it in there. No, it doesn't always makes sense, but, then, that's why it reminds me of Adams. I mean, if I could fly because I somehow got distracted from hitting the ground while falling, I would totally do that! And SGJWIB has those kinds of leaps.

Here's the thing, if you're not someone that likes Douglas Adams, first, "what's wrong with you?" and, second, you probably won't enjoy Briane's... almost book. However, if you do like Adams, as I do, you should definitely give SGJWIB a try. At a buck, you really can't lose.

The story is wild and crazy enough that there's not much you can say about it in a critical way. It's one of those things you like or you don't like. I happen to like. I'd give it an A except for one thing: the ending. It felt a little like Briane decided it was just time to end the story and, so, just did that. It's rather abrupt. However, he adds in a twist that makes it (mostly) okay. It's one of those kinds of things that Briane seems to like and leaves you wanting to say, "So... what actually happened here?" But he doesn't answer those questions, so you'll have to decide for yourself.

Anyway, it's a fun read, and I give it a B+ to an A-. I need to reread it before I can make a firmer decision than that, but I'm in the middle of something else at the moment and don't have the time. The link to make the purchase is back up at the top of the post, and, like I said, if you like Adams, for a measly $0.99, you really can't go wrong.

1. No new Tib story (again) today. Yes, I know that's twice this month, but, well, what can I say? I just haven't had enough silence to be able to do much writing. I hate that that's an issue for me, but it is. Hopefully, I'll have the next part up next week (since the kids will be back in school) and, maybe, have some other Tib news to go along with it. On the bright side, though, this gives all of you another week to read about Tib's first meeting with the Man with No Eyes. And I know you all need that extra week, because I know only two people clicked through to it (stat counters... a blessing... and a curse!).

2. The GREAT peanut butter and peppermint experiment!
We have results. All three children have tried this... concoction, for lack of a better word, and they liked it. All three of them, which is fairly significant since they never all like the same thing. In fact, my middle child says that all of them liking something is a sign of the end of the world, so, maybe, 2012 really is the end.

I can't just let y'all go on the word of my kids, though, so I tried it, too. It's... odd. I can't say that I liked it, but I also can't say that I didn't like it. It's one of those things that makes you say, "wait, let me try that again." My experience with those things is that you usually end up liking them. Sometimes, it takes 30 tries, but you can't ever pass up trying it again which just leads to liking it. More experimentation is required. 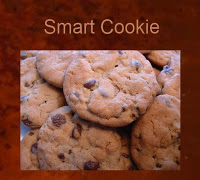 Michael Offutt handed me this award a few days ago. I've gotten to the point where, generally, I try not to continue the viral spread of these things, but I'm making an exception for this one:
1. because I like the name of it.
2. because Michael said he needed to give it to me so that I would have something to talk about other than my dog.

The gimmick with this award is to share four little known facts about anything. Anything is a rather broad category to choose from, so I think I have that covered. Unlike Briane Pagel, who also received this award from Michael, I'm going to stick to "little known" rather than "unknown," because I knew at least one of Pagel's unknown facts thereby discrediting his entire list (he has, thus far, refrained from commenting about this).

Four little known facts:
1. Michael Offutt is envious of my dog ownership which is why he wants me to stop talking about my dog. It's like a little thorn jabbing at him every time I mention 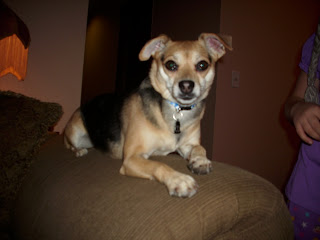 Isn't she SO cute?

2. Although closely related, "envy" and "jealousy" are not direct synonyms despite the generally incorrect usage of "jealousy" that has permeated our society. Mostly, people use "jealous" when what they should be saying is "envious." You are not "jealous" of someone else's success; you are "envious" of  it. You are not "jealous" of someone's new high-priced gadget; you are "envious" of it. Michael could only be "jealous" of my dog if he was envious of the relationship I have with my dog or if, say, it was his dog, but she liked me better.

3. The misuse of the word "jealousy" and its various forms is a particular pet peeve of my wife's. You should all learn to use it correctly so she will not chastise me for it when one of you slips. heh

4. Michael should get his own dog. Dogs have been shown to improve the quality of life of their owners, especially in regards to people that live alone. If Michael got his own dog, not only would it be good for him, but he could quit being envious of my dog and, instead, we could swap dog stories until all the rest of you were sick to death of it.

>sigh< I feel so much better now. It's all in good fun, right Michael? Right? It was a joke! Really! Hey!

Um... on that note, I'm not going to choose anyone specific to pass this on to. If you feel like you have four little known facts that you would like to pass on to the world, please, feel as if you've been granted the smart cookie award. I encourage it!

You know, now, I want a cookie.
Hey, Michael! Where's my cookie? Why didn't I get a cookie with this award?
What do you mean you ate it?
Bah!
Posted by Andrew Leon at 1:39 PM