Another Thursday... and we all know what that means, right? Well, by this point, I hope so. Except not today. What? What am I even talking about at this point?
Well, unfortunately, there has just been no time to get the next Tib chapter written up this past week. I guess it's a good thing I'm not getting a grade on it. heh Except I don't have my creative writing kids today, anyway, because they're having a big Christmas party, so I'm not letting any of them down. Which is NOT why I didn't get it written up for this week. It is, after all, all in my head. I just didn't have time to write it down. So to speak. Since I wouldn't be doing any real writing.
Just know that, right now, Tib is sitting oblivious in class at school NOT waiting for Christmas break but waiting to see his friend Officer Williams after school at the diner. He's having a hard time focusing, because he's worried about his mother and what he's going to say to the cop. He'd have an even harder time if he knew that Fred Williams had encountered the Man With No Eyes.

In other news, we went to the California Academy of Science in San Francisco this past weekend. It's one of our favorite places to go. My kids love it, and there's always stuff to see. Even the stuff we've already seen. Really, we just can't spend enough time there to get to see everything as much as we want to see it. Right now, they have reindeer. Live reindeer. That was pretty cool, and I'd love to tell you all the things we learned about them, but that's not what this post is about. I will, however, show you a picture: 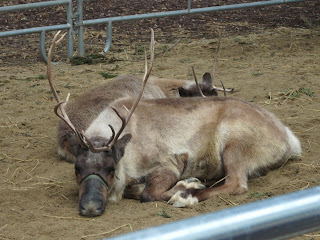 Anyway...
We took the kids to the gift shop this time, which is something we never do. I hate gift shops. They're full of (mostly) cheap crap that is way overpriced. Like movie theater concessions. Which I do love, but that's because the "butter" they put on  the popcorn in movie theaters is addictive. It's so addictive that it can get you just be its scent, which is really not fair, since it's highly impractical to only go to the movies when you have a cold and can't smell the popcorn. Not that we ever buy popcorn at the movies, because it had to go at the same time we gave up sugar, but I still want to buy the popcorn at the movies. I suppose it's a good thing I don't actually get to go to more movies.
But I digress...

So we took the kids to the gift shop, because we never take them there except to look. And we'd prefer not to do that, because looking always leads to asking and asking leads to begging and begging leads to, well, unpleasantness and that leads to the dark side. If you have kids, you know what I'm talking about. But this time... this time we were prepared to buy them something. You can only put it off for so long, and, on our last trip to the Academy, we finally broke down and said "next time." This was "next time."

One of my issues with the Academy gift shops (they have 3 (no, don't ask me why they need to have 3 different gift shops in the same building, but they do)) is that they are full of rocks. Sure, they're pretty rocks, but they're still rocks, and my daughter always wants to buy them. I don't know why, but I have something against buying rocks. Maybe, it's because there are plenty just laying around outside. Sure, they're not as pretty as the ones in the gift shops, but, I'm sure, if she looked hard enough, she could find some good ones. And for free. Yes, my daughter chose to spend her money on rocks. But that's still not what this post is about.

My younger son is really into building things. And robots. He hasn't started building robots, yet, but we're waiting for that  to happen. If only we could afford to get him the Lego Mindstorm set, we'd have little Lego robots all over the house, so, maybe, actually, that's a good thing. He found this robot kit that was within the budget we allowed him, and I really wanted him to get it. However, that was not to be. Because the gift shop had Hex Bugs. Or, more specifically, Hex Bug Nanos. In the end, he and his brother pooled their money to buy a glow-in-the-dark Nano habitat. My issue with that was that he could have gotten that at Target, and I would rather have had him buy something that he couldn't get at Target. Like the robot kit. But that's still not what this post is about.

[And with that, I have to go pick up my kids from school, so you'll just have to hold your breath until I get back. Don't worry; if you pass out, you'll start breathing again on your own. I have it on good authority, at any rate. I've never tried that myself. Why flirt with death, you know? I've heard he doesn't take to that very well.]

Okay... and... we're back! Or, at least, I am. I'm just assuming you guys are still out there. Hopefully, still conscious.

So... stealing science... that's where all of this is going. Of course, it's not real science. It's just gift shop stuff. And there's a lesson to be learned here.

While at the gift shop, my younger son was playing with a butterfly finger puppet. We were there for a while, because my daughter doesn't make her shopping decisions as quickly as the boys do. So he has this big box of Nano habitat and a finger puppet. He thought he put the finger puppet back. And I never knew I had it. At some point, while still waiting for my daughter to make her decisions, we sent the boys off to use the restroom, since we were heading back home as soon as we were finished in the gift shop. They passed their loot to me, and I carried it around with me along with a few things for my niece and nephew. Once my daughter finally had her rocks picked out (because she would not be dissuaded), I took her stuff and sent her off to go to the bathroom, too. Along with my wife. I went to pay. I placed all of the items up on the counter, and the cashier rang them all up. I never saw a butterfly finger puppet anywhere in there. Neither did the cashier.

However, when we got home and were unloading everything from the bag, there was a butterfly finger puppet in the bottom of it. Presumably, the same one that my son had been playing with. He felt horrible. I did not. I figure it was like one of the real butterflies in the rain forest there in the Academy. They can, sometimes, try to hitchhiker out of the biome on the backs of the guests, and they have people at the exist to make sure you aren't carrying any tiny passengers. None of us know how the butterfly got in the bag. Maybe it wasn't even the same butterfly my son had been playing with. But he handed the stuff off to me, and I handed all of the stuff off to the cashier. I watched her ring it all up, and I watched her put it all into a bag, and I never saw a butterfly. The main thing is that it wasn't the fault of my son.

The butterfly now lives on our Christmas tree. 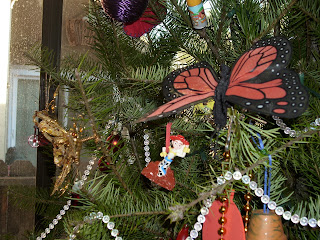 And, now, the real point to all of this:

As writers, sometimes, ideas, other people's ideas, work their way into our writing without us knowing about it. And, you know what, that's completely okay. A million different stories can be written about the same idea. I'm sure it's a million, because I'm sure that there are at least a million stories out there about little orphan boys. Or orphan girls. Orphans. They're really popular. Just ask Disney about it. Sometime, we get really hung up about discovering that someone else has used the same idea we've used, and our impulse to trash our idea and go look for a new one. Sort of like my son getting upset about the butterfly. Because he thought he stole it. Yes, we didn't pay for it, but stealing takes intent, and there was no intent on the part of anyone to take away anything that didn't belong to us. But, sometimes, these things happen. Like ideas working their ways through our thoughts and minds.

And, then, they come out when we don't expect them to. Like the butterfly.

But, you know, it's okay to use the same ideas as other people. No, you don't want to take their stories, but it's hard to get away from ideas. Especially when ideas sort of permeate society and people will often have the same ideas even though they live thousands of miles apart and have never met. Like the Professor in that Giligan's Island movie where they finally return to civilization and he's found that all the things he invented while on the island have already been invented. Fortunately, books are more complex than just things, so it's really unlikely that more than one person is going to come up with the exact same story.

So... don't be afraid to embrace the butterflies that hitch a ride in your thoughts. Make them parts of the stories in your head, and don't be ashamed of it. If you ever think you ought to be, just look out there at all of the stories about orphan boys. Or orphan boys with an unknown heritage. Just to give a brief example of how that one small idea can be turned into stories that are vastly different, I'll give you some names: Luke Skywalker, Harry Potter, Garion.


And, as an added bonus, just to show Briane Pagel that he's not the only one to ever think that having dinosaurs on your Christmas tree is a good idea: 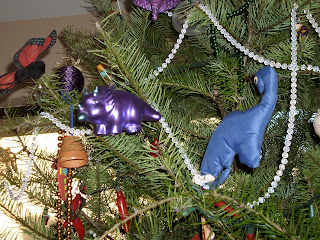 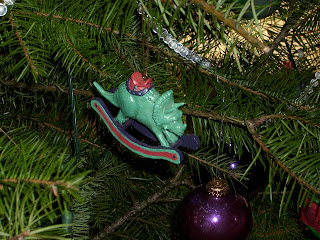 There are more, but I've certainly gone way over my picture allotment for this post (since that's, well, zero), so I'll stop here and wish you all a Merry Christmas.