She sits and waits...

[Before I get into the post, I want to remind you that it's Thursday. Oh, you already knew that? Well, being Thursday, it's the day I update the Tiberius tab with the next installment of his story. No, I didn't update it last week, so, yes, technically, I'm a week behind. It's going to stay that way. Tib is not my only writing project, so you'll just have to deal. Also, I'd love more feedback about Tib. You can leave it, well, anywhere, really. Except on the Tib page. Because I haven't figured out how to allow comments on the non-post pages, yet. I'll get around to it. Figuring out how to get the PayPal button up for signed copies of The House on the Corner used up all of my allotment for fiddling with tech stuff for... well, a couple or few weeks, at least. Speaking of signed copies, The House on the Corner would make a great Christmas gift, so order your signed copy now! (while I still have them on hand)]

I promise this isn't going to become a blog all about dogs. I did manage to make it more than a month before devoting an entire post to her, after all. But I did have a thought, a particular thought, about the dog when I came out of the bathroom the other day. In fact, it was what the last post was supposed to be about, but I got all caught up in the story of getting the dog and figured 2000 words was enough for one post. Before I go on, how about another look at her? 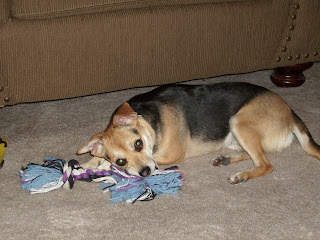 Dogs have a pretty uncanny ability at figuring people out. They are the only non-primate animal (maybe the only animal, but I'm sure about the non-primate part) that scan faces in the same way that humans do. It allows them to have great empathy for human emotion and is what has made them such a great companion for humanity for the last 15,000 years.
It also allows them to quickly discern their alpha.

Before we had even left the shelter with Tessa, she had already determined that I was her alpha. I'm pretty sure she decided that she was going home with us before I decided it. She just knew. Being the alpha for a dog can be a lot of responsibility, and other people can't always fill in. Some breeds, like Chows, can be very hostile to anyone other than their alpha. Fortunately, Tessa isn't one of those obsessively clingy, needy dogs that has to be attached to its alpha 24/7.

We picked Tessa up the weekend before my kids went on fall break, which was nice, because they had a full week with her right off the bat. It gave Tessa a chance to get acclimated to "her people." Still, the first time I had to go off and leave her with them, she freaked my kids out. I just had to make a quick trip to the store to pick something up. I was gone, maybe, 20 minutes, but she sat at the front door and, according to my kids, howled and moaned the whole time I was gone. She was so happy to see me when I got back that I believe them. The dog did have to learn that it's not going to be abandoned, and, I'm sure, that's worse for a shelter dog that has already been abandoned and had all sorts of strange people dealing with it for months. I can't really imagine the kind of panic the dog must have been going through when I went off without her.

She has learned that I'm coming back, and I can leave the house, now, without having to worry about her crying and howling the whole time I'm gone. But that first week was rough. I couldn't even go to the bathroom without her whimpering at the door the entire time I was in there. It was kind of like having an infant again. Just a furry, mobile one.

The other thing with being the alpha is that her attention tends to always shift to me. For instance, if one of the kids is playing with her and I walk by, she runs over to me to see if I will play with her instead. I have to be careful, because I want the kids to have a good relationship with the dog, so I don't want to pull her away from them. As I've said, though, she's smart, and she's learned that my daughter is, in many ways, her personal playmate. If anyone is playing with the dog, my daughter cannot keep herself out of it. She's the only other person in the house besides me that's willing to play rough with the dog, too. My younger son is her cuddle monster. If she wants loves, she goes to him. He's also good for catch, but not as good as she'd like for tug and wrestling, so that's my daughter. The oldest is really only good for the occasional pat on the head. He's a teenager; what can I say?

But to get to the point...
The other day I was coming out of the bathroom, and there she was on the floor in front of the door waiting for me (That's much more likely to happen during  the day when it's just me and the dog here at home). It occurred to me that people are just like that. Sitting and waiting. All the time. For something. For someone. For anything, really. We make our lives dependent on some other alpha.

Sometimes, that alpha is a person. We wrap ourselves up and become dependent on them for, well, everything. We don't have to make decisions that way, and we don't have to be responsible that way, and, let's face it, life's just a lot easier if you leave things to someone else to take care of. Honestly, I think most people live their lives like this.

Sometimes, it's a job. That's slightly better than when it's a person, but not by much.

And authors suffer from this problem as much as anyone, maybe more. We make our writing dependent on "inspiration." That was the specific thought that struck me when I saw my dog waiting for me outside of the bathroom. That I was her muse, and she was waiting for me to lay some inspiration on her. I do have to say that it makes the whole being a writer thing a lot easier. When you can blame your lack of productivity on a lack of inspiration. "Hey, it's not my fault. I'm waiting for inspiration."

Now, I'm not knocking inspiration. It's great to write when you're feeling inspired. I am knocking sitting around and waiting for inspiration to happen, though. And I've lost count of the number of blogs I've seen with the author complaining about not being able to write because she (and I'm saying "she" because I haven't seen this on any of the blogs of male authors that I follow (I don't know why that is, but I'd like to know)) "hasn't been inspired lately." Look, no responsibility!

Here's what I've found interesting. When I'm home working during the day, the dog lays around most of the time waiting for some attention. Waiting for her inspiration to strike, so to speak. When she's just laying around, I tend to not notice her. Meaning, I'm busy writing, and I leave her to lay there. I do have other things to do besides play tug with her all day, after all. However, sometimes, she'll get up, go get her ball, and start tossing it around. It's very cute, and, guess what, I notice her. When she decides to stop laying there waiting for me and to take some initiative, it draws my attention, and, usually, I'll go over and play with her for a bit. Even when I'm busy. Because I just can't help it.

That's how inspiration works. It doesn't come to us when we're just waiting. Why would it? It would have to come over and slap us around to get our attention. Inspiration doesn't want to do that. Inspiration wants to see us working on something. When we are, it says "ah-ha!" and wants to get involved and comes over to play with us and, pretty soon, we're typing away with inspiration sitting on our shoulders egging us on. And, you know, if inspiration doesn't come along, we often come out with good stuff anyway, because we're capable of writing some pretty cool stuff all on our own. But none of that happens when we're just waiting for it.

Put yourself in inspiration's shoes. Who are you going to pick: the guy just laying there or the guy trying to make something happen?

That thing, that whatever it is, is different for each person, but it's always something that comes from inside that person. That moment when they figure out that they have to quit waiting. And, as I said, it's not just writing, it's everything. It's life. So, quit waiting for life to happen to you and make it happen. Get up and do something. Write something. Be something. Take the ball in your mouth and start tossing it around. It's cute, just ask my dog; someone will notice and want to join in.
Posted by Andrew Leon at 12:28 PM