So... today is the day of the infamous 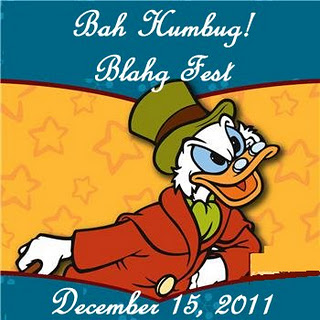 being hosted by the Grumpy Bulldog himself.
Today being Thursday, December 15. At least it is as I write this; although, I can't say with any certainty that this will get posted on Thursday. I suppose we'll see. It's just been one of those weeks where I haven't had time to get everything accomplished, so this may well bleed over into Friday.

I really love Christmas. It was a magical time when I was a kid and one of only two times in the year when I was pretty certain that I would get to see all of my cousins and family. That being as it is, the task of coming up with 12 things I don't like about the holidays seemed a pretty daunting task. If my wife hadn't started throwing out ideas, I may not have been able to do it. By the way, she says that she gets credit for at least half of this post.
heh

12. The United States Postal Service: I had to go to the post office this morning on business unrelated to shipping anything. But I had to wait in line anyway. There were about two dozen people in line when I got there. One postal worker. Yes, one postal worker. I was there early (not by choice), and they are always busiest right after they open, so you'd think they'd plan ahead about things like that, but, no, it's the post office. People can wait in line. We should be glad to wait  in line, in fact. This is why the post office isn't going to make it. It's not just the internet; it's because no one, and I mean no one, wants to go to the post office. The only place that might by worse is the DMV. Oh, gee, both government agencies...
Anyway... about halfway through the line, a woman got to the window with a big bag of parcels she needed to mail. At that point, they finally brought out a second postal worker. Not that that sped anything up, because the second person almost immediately got bogged down with some issue with a customer and was still with that same customer when I finally left. The post office is no one's idea of fun, but at Christmas, it's a very special kind of Hell. In fact, I think that is one of the levels of Hell.
The only reason that the Post Office is not higher on the list is that I pretty much avoid it. Today was one of those rare exceptions.

11. Wrapping: I do... I hate wrapping presents. Ever. Christmas just compounds the issue. The main reason is the waste. I understand that children love to open presents (it's part of the Magic), which is why I'm willing to do it. But I wish that presents for adults could just go unwrapped. They can be in the shopping bags. It serves sort of the same purpose. My wife tells me I'm just wrong.
Then there's the part of it where I'm spending a lot of time and effort on something that's just going to get ripped off in a matter of seconds. It's like making the bed. Why even bother? My wife tells me I'm just wrong about that, too.
Plus, I suck at wrapping.

10. Making room for the Christmas tree: I hate rearranging furniture. Part of that goes back to my childhood when my mom would decide every couple of months that the furniture needed to be rearranged for no good reason. This included moving the piano upstairs once. And another time moving the washer and dryer upstairs (so that they would be closer to my parents' bedroom). And all sorts of other things. At any rate, I hate the whole process of making room to bring the tree in which is just going to be undone when the tree goes back out.

9. Food: Not that I hate food, it's just that there's so much more of all the stuff you shouldn't eat being provided pretty much everywhere. It's like everyone becomes secret food agents: XX7 -- license to eat.

8. Time: This one is related to the food in concept. Time is finite. Stop trying to cram so many activities into the few weeks leading up to Christmas. It's not like time gets fatter at Christmas, unlike people (who gain up to 10 lbs the last 6 weeks of the year); there's not any extra to go around, so stop trying to cram so much into it. The events are just an excuse to offer up more food that no one needs, anyway.

7. Music: I hate to list this one, because so many other people did, but there's way too much bad Christmas music. And why do they play the same stupid songs over and over again. Does anyone over the age of eight like "Run, Run Rudolph"? Seriously. Stop playing all this crap. And, with a few exceptions, you can skip any artist's Christmas album. Mostly, these don't have anything to do with the artist; it's just the music industry moguls squeezing more bucks out of people while someone (>cough< Bieber) is popular. Compilations tend to be a bit better, because the artist picks a song s/he/they really like, and do just the one. You may get a few bad songs on a compilation, but you tend to get a few real jewels, too.

5. Telemarketers and charities: Stop calling my house! See the previous entry. Not only do I not have extra Christmas money laying around; in fact, I have less. Because of all the other extra expenses that pop up this time of year. Like the heating bill.

4. Controversy: I'm not coming down on one side or the other on the whole "is Christmas a religious or a pagan holiday" thing. The truth is it doesn't matter. I'm just tired of people arguing over it. This is supposed to be the season of goodwill toward men no matter from what angle you come at it, so everyone should just act like that and let other people celebrate the way they want to. Personally, I don't put an X in my mas (I wouldn't want Marvel coming after me), but if other people want to, for whatever reason, go ahead. This country is supposed to be about freedom and freedom of expression, but, most of the time, everyone spends their time acting worse than my kids. (Yes, I'm looking at you democrats and republicans.)

3. People: They're everywhere. Here's the thing about people, and this has been proven, meaning there have been actual studies done around this phenomenon, and it has been shown to be real, is that the more of them you put together in one place, the lower the collective IQ goes. People are stupid enough as it is; we don't really need large gatherings to bring down the intelligence even more. And this includes the roads. I hate driving anywhere during December, because driving also does something to intelligence. Or entitlement. Or something.

2. Commercialization: Really, it's getting to the point where the only way my family can celebrate the holiday the way we want to celebrate it is to avoid it. Or, at least, the way it's presented out there in the world. Whatever happened to the season of giving? Oh, yeah, that's right; we've turned it into the season of buying. That's all it's about anymore. Buy BUY BUY! And then go out and but some more. And take your family out to eat a few times while you're busy buying. See how all of this stuff flows together. But the pie still isn't any bigger.

1. Length: When I was a kid, Christmas started the day after Thanksgiving. It was like a law. Like the blue law. It restricted when Christmas stuff could be sold. Not the blue law, that just meant you couldn't buy stuff on Sunday, but the Thanksgiving/Christmas law was like that. You could go into a store the day before Thanksgiving, and it would be just like any other day of the year. The day after Thanksgiving, it was transformed into a Christmas wonderland. Like Magic. It was wonderful.
Now? I hate (HATE) seeing Christmas decorations out on the shelf with all the Halloween stuff. It's just wrong. And there's no magical transformation of, well, anything anymore. It's all just this long process from the beginning of October through the end of November until it's all there in December. No magic for the kids. No anticipation. No waiting to go look at all the wondrous Christmas displays. It makes me sad.
The thing is, it's really just this one thing that I hate about the holidays. Except that this has happened because of the whole commercialization thing. I could drop numbers 3-12 completely off the list, in all reality, because, although annoyances, I can deal with them. But these last two... they kill my spirit. Christmas should be a time of joy and generosity and MAGIC. And we've taken that all away.

So... there's my list. I haven't made it through all of the others, yet, but I will try to get to them all over the next couple of days.