Let's go for a walk... Part 1: The Turkey Tree (or Why Stories Matter) 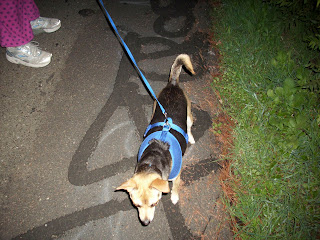 is the need for walks. Walks are a good time for allowing the dog to do her business (no picture available), but they are not for that purpose. She has special "potty breaks" in the mornings and evenings that are just for the purpose of taking care of said business, but she needs some real outside time, too, so that means walks. Beside the quick trips outside at 6am and 7pm (15 minutes or so each), she also gets at least one walk of at least one hour every day (some days she gets two) and at least one other potty break.

As I may have mentioned, we have a park right next to our house. Through the park, there is an entrance to the path by the creek that runs through town. My wife and I like to bike together on the path on the weekends and have been doing that for a few years. Previously, though, we had to bike to the path before we could bike on the path. The path is really nice, and the city does a pretty decent job on the upkeep of it. Having the creek path right there is very (extremely) convenient. Of course, one of the criteria we had in looking for a house was that it had convenient access to the creek path, so it's not a coincidence that we're in the house we're in.

One of the things I've learned from these walks is that my family doesn't do walks in quite the same way as most people do them. Mostly, this is my fault (I think). However, this post isn't about any of that, but I felt it needed saying at the outset, since it's what made me think of doing this series of posts. Part 2 will probably be about the troll bridge and the dragon crossing; then, you'll understand.

Raise your hand if you would believe me if I told you that turkeys roost in trees. Yeah, I know. Me, too. That's a crazy suggestion, and I wouldn't believe me, either. That has about the same level of believability as if I told you that dogs can climb 10' tall chain link fences. Okay, not all dogs, but one particular dog that I used to know. But that's a different story. At any rate, when presented with a blunt fact like that, it's often less than believable.

So let me tell you a story:

This happened back in the middle of November when it was still light enough when my wife got home from work to get the whole family out on the evening dog walk. Make a note of the fact that this was prior to Thanksgiving. Not that it's exactly important to the story, but it, in my mind, at least, it makes it more interesting.

Whoever has the dog goes first. Not because there's a rule or anything, but the dog sort of insists on being out in front. Generally, that person is me. [Especially back in the first weeks after we got her when she was still trying to eat every bike and jogger that passed us.] This actually results in a weird yo-yo effect, because she stops to smell things and dig and stuff, so the family group will pass the dog by while she's busy. Once they've reached whatever distance ahead of her that she deems is "too far," she makes a mad dash to catch up, so whoever is holding the dog (me) has to run (and I do mean run -- this is no jogging doggy) to catch up and, then, pass the family group by at least 20' to 30' before she can slow down again.

So, on the day of the walk, I was out in front with Tessa. We were rounding a curve in the trail. Off to the left, behind a fence, was a field area, and, in the distance, a great white bird rose up out of the nearly knee high grass and flew up into a tree on the other side of the curve. Tessa is kind of into chasing birds, so she started running to get to where the bird was. But, like I said, it wasn't a straight shot, because we were on the curve, and we had to go around to where the bird was, which meant losing sight of it.

We got around the bend, and Tessa began looking for the bird. She's not really very good at searching for things in trees (except squirrels), though, so she got busy sniffing the ground for it. However, I was curious as to what kind of bird we'd seen, so I was looking up in the trees while we waited for everyone to catch up. And, then, I saw it. It was a big, white turkey sitting on a branch up in the tree.

Just a word about turkeys: we have wild turkeys that roam around our city. Just last week, my wife and I saw a fairly large flock of them roaming around the train tracks just a few blocks from downtown. Wild turkeys are not at all like what Americans usually think of when we think of turkeys. We think of the grossly obese birds we eat for Thanksgiving. Wild turkeys are not these turkeys. So this turkey up in the tree wasn't some huge blob of meat waiting to be eaten. When I say it was big, I mean that it was big in that it was 3-4 times the size of a crow.

I stood there in a state of amazement. Not only had I never seen a turkey in a tree before, but I had never even entertained the thought of turkeys in trees. And it wasn't just the one turkey, either. As my eyes adjusted to the gloom of the gathering dusk, I saw that there were a couple of other, smaller, turkeys up  in the branches, too. They were more typical adorned in grey and brown, so they were a lot harder to see than the white one.  As I watched, another turkey flew up into the branches.

I ran back down the trail yelling for my family to hurry up and catch up to us. I had something amazing to show them. I turned back around and ran back to the tree. The dog was really confused by all this back-and-forthing. She knew there was something to be excited about, but she couldn't figure out what. After all, there were no squirrels that she could see. Right?

My family finally caught up to me. My daughter, first, because she's the most willing to run. We all gawked at the turkeys up in the tree... after I made the kids scoot back so that they weren't right under them. I figured no one needed a mouth full of turkey poop. We watched several more turkeys join the others until there were about eight turkeys roosting in the tree.

We eventually tore ourselves away from the weirdness of the flock of turkeys up in the tree, but I went back looking for them everyday for about a week. I really wanted a picture of them up in the branches, but we've never found them up there again, and I didn't have my camera with me that one time we saw them. Not that I would have been able to get anything usable; it was too dark.

That tree is a landmark on our walking path, now: the Turkey Tree. Here are some pictures of the bare branches. Bare of turkeys, that is. 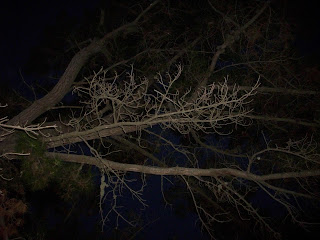 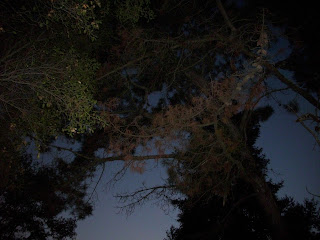 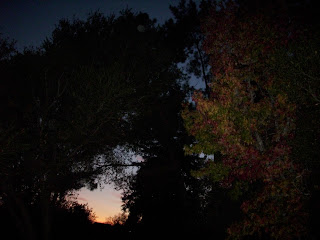 Now, you probably all believe that turkeys roost in trees. Why? Because the story gives the statement validity. This is an example of a true story backing up a fact, but all of this holds for fiction, too. Our stories give validity to the fictions we write about. It's what allows people to get drawn in and become apart of our worlds. And it's what makes people from history real to us today. Or people from our lives have real pasts. Like my kids great-grandfather and how he once lost $50,000 in the ocean. That's one of those statements that makes you go, "No way. You're lying." But when you hear the story... well, another time, maybe.
Posted by Andrew Leon at 10:52 AM