As I've mentioned before, I hate editing. I mean, it's like the least fun thing in the world to do. Sort of like geometry. Or, at least, geometry in my high school geometry class. I've heard that in other places it isn't as bad as that was. [Just a note: I excelled in geometry (ending the year with greater than 100% in the class (even having episodes where getting 100% on a test would bring my grade down)), but I hated it all the same.] I want everything the way I want it the first time and going back and having to pull things out and add new things in is absolutely no fun for me. And you people out there that like to write fast and dirty and fix everything in the editing...? You people are insane! I mean that.
By the way, George Lucas believes movies are made in the editing room. To him, filming is analogous to gathering your materials, but you actually build your movie in the editing room. But writing isn't a movie, and I don't like editing.

We got our Christmas tree this past weekend. The arrival of the tree each year always means jiggling things around. Of course, at the old place, it was jiggling things around in the same way every year. There was really only one place in the apartment that the tree could go, and we'd just clear that spot out for it, stick it in, and, a few weeks later, pull it back out. This year, though, is different. We don't have a place for the tree to be. Not an established place. We don't really have the house arranged the way we want it, yet. Part of the reason is because of Christmas; we knew we'd have to re-arrange anyway, so we just put furniture where it would work till we got to where we are now.

But we're here, now. Or we were a few nights ago.

The living room was still in rough draft form, but we'd kind of gotten used to it. Isn't it interesting how quickly that happens? But we had this new scene, the Christmas tree, that had to be edited in. But the tree was making the word count too high. Clearly, some things had to go. A lot of it was stuff that should have been taken out already -- extra words in the form of boxes with knick-knacks and stuff (like packing tape and tools). Some was just stuff that needed to be moved. Like the piano. We'd thought we had it where we wanted it, initially, but it was becoming more and more clear that it needed to be shifted. We just hadn't gotten to it. However, some of it was stuff I'm attached to but clearly had to go to serve the higher purpose of including the Christmas tree in the new draft of the living room. You know those bits in your writing that you really like, but they don't do anything for the story? Yeah, those... the ones you just want to leave in for your own benefit even though they detract from the aesthetic of the overall work.

Needless to say, the editing project didn't go as smoothly as my wife and I would have liked. But we got through it, and the room is sort of the way we want it. Maybe. Actually, I suspect, there will be some more tweaking. As my wife says, our furniture is fat. We've been trying to get the couch and, especially, the matching chair to lose some weight, but it hasn't been very effective so far.

And the actual decorations aren't up, yet. Just the tree. So there's still some polishing of this draft to do. Hypothetically, the decorations go up tonight.

Not only do we have this new scene in the living room chapter, but we have this whole new plot thread in the form of our dog. Including convincing her that she'd rather drink from her own water bowl rather than the Christmas tree stand. How's that for conflict for you? That aside, she's been weaving her way into the overall structure of the piece, and it's working out nicely.
[And just in case you've forgotten what she looks like, here's a gratuitous picture of her keeping warm: 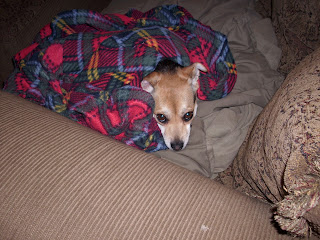 ﻿Part of all of this is knowing your audience. I mean, if it was just me, I wouldn't decorate at all. Or have a tree. Although I like the tree and the decorations, that stuff is somewhat like eating crawfish: too much work for what you get out of it. I don't care how good it tastes. I'd just go around looking at other people's decorations, and I'd be fine with it. But I have these children, my audience, and they like all this stuff. In fact, there would be massive protests if we didn't have a tree, possibly even riots. There'd probably be an Occupy Dad movement or maybe even a coup. So, knowing my audience, I edit the room, and, this year, the front of the house, too (this will be our first time since we couldn't decorate the outside of our place at the apartment). See, the amount of editing required largely depends upon your audience.
Anyway... that was my deep thought of the weekend. I'm not really sure if there's a point other  than making the comparison, so take from it what you will.
Merry Christmas!
And good luck with your editing. I mean decorating!
Posted by Andrew Leon at 1:01 PM