Venom: Let There Be Carnage (a movie review post) 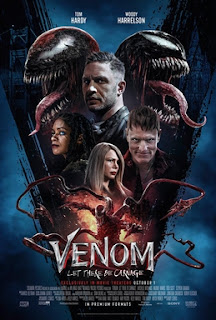 I suppose I forgot how much I enjoyed the first Venom movie. I know I have because I went back an read my review and it expresses a degree of appreciation greater than what I remember, which means I should probably re-watch it. Part of the problem is that I have no great liking for Tom Hardy, except, I guess, as Venom, because I clearly enjoyed him in the first movie, and I did again in this one. He is quite good as Eddie Brock.
Still, I was going to skip this one until it "came out on DVD" (LOL), because I had no one to go see it with, BUT my son (the younger one) found out that the post-movie clip ties into the MCU and, so, he wanted to go see it (even though he has not seen the first one). I'm glad I didn't skip it. The relationship between Eddie and Venom is, for lack of a better way to express it, fun. My son laughed all through the first half of the movie.
My impression, without going back and re-watching the first one, is that this one is better. Don't take my word for it.
I do have one complaint... Look, it's me; what do you expect?
This is not exactly about the movie...
I mean, it is, but...
It's Woody Harrelson, okay? I like Harrelson. A lot. And he is really good in the role. Seriously, he is. BUT! But...Look, Harrelson is at least a decade older than me, and they have him playing a guy who is supposed to be in his 20s. And, hey, they do a great job with the makeup. Most of the time, it works but, every once in a while, during a closeup, you can just see his age. And, then, it doesn't work. It feels kind of weird, actually. I feel like Sony could have found someone of an appropriate age to play the part. It's not like Harrelson is any extra draw for this movie. They're not fooling some Boomer into going to see a Venom movie just because Harrelson is in it.
I guess it's a small complaint. It's just... weird.
Michelle Williams may be better in this one? I don't know. She's so generic to me, I feel like she could be anyone. Don't get me wrong, she's fine in the movie. There's not a lot for her to do to allow her to show any real acting talent. Reid what's-his-name, who I think of as Dan-from-Veep who also plays Dan in this movie, has more room to show off. And I like him pretty well.
Look, the movie is really about Venom and the relationship between Venom and Brock, and it completely succeeds at that. The conflict with Carnage is mostly secondary. Oh, which brings me to the only other issue I have with the movie: it's presented as a given that Carnage would want to kill his "father." Why? There's no reason given. Carnage is born and immediately wants to do away with "daddy." No one bothers to wonder why, not even, or especially, Venom. So maybe this is how it is on the symbiote planet? That seems like it would make it difficult to have any kind of society. But it's never addressed, and that one thing is kind of nagging at me.
That said, it's a fun movie. If you don't mind the plethora of dead bodies because, yeah, Carnage lives up to his name. It's not gory, though, or anything like that, but it's clear that Carnage is leaving a trail... um... that's not a big enough word... a freeway of bodies behind him as he goes. He kills everyone. So... fun? Look, they don't show the bodies, okay. That would be horrific. As it is, it's fun.
And, yes, the post-movie clip does promise, in a sense, a Venom/Spider-Man meeting. Evidently not in the next Spider-Man movie, though. It will be interesting to see what Marvel does with Venom as an import rather than re-creating him.
Oh, I suppose I failed to mention Shriek. She feels mostly like a MacGuffin. Which is kind of weird, I suppose, to say about a character, but she's really insignificant to the actual plot. I guess she needed to be there because she's in the "Maximum Carnage" storyline in the comics and to give Cletus some direction. -shrug- She's fine; she just feels superfluous.

Look, ignore all the negative stuff I said. It makes it sound worse than it is, because it's not worse at all. I actually wish I could sit down and watch both of them back-to-back, right now, but I guess I will have to wait to do that.
Posted by Andrew Leon at 12:00 AM