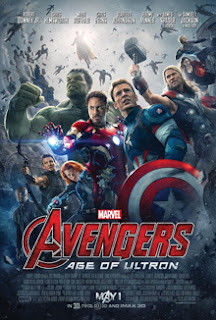 I'm still waiting for a new solo Hulk movie with Mark Ruffalo. I don't think that's going to happen, but he is going to be in the new She-Hulk series on Disney+, so I guess that will have to do. Oh, you will have to go back and re-read my previous Ultron review to understand that context, I suppose.

Age of Ultron is a difficult movie, at least in comparison to the other MCU films. For one thing, there is no clear victory. Sure, Ultron is destroyed, but he wasn't exactly defeated, not entirely, which is especially difficult since The Avengers were responsible for creating the menace to begin with. And one of the heroes dies, which is the first for that in the MCU. Not to mention that the plot goes off in several directions during the middle of the movie. Not to mention the problematic usage of Black Widow.

Seriously, after writing some of the best scenes for Widow in the first Avengers movie, Whedon reduces Natasha to not much more than an extra in this one while simultaneously raising the value of Hawkeye. Which is not to say that Hawkeye didn't need some focus, but turning Black Widow into, essentially, the Keeper of Hulk isn't exactly cool. Romance or no.

Here is what Ultron did well:
The opening scene where there team is attacking the Hydra base is superb. It shows the dynamic that the team has established and that they have, indeed, come together to work as a team. Each of them has established roles, and they do well in them. They have even made allowances for teammates (Stark) who are unable to play well with others. Whereas Thor and Cap have developed strategies for working with each other, Stark is still mostly a lone wolf kind of character. Within the context of what they are doing, it's fine; dismantling Hydra is not much of a challenge for the super heroes and one they wouldn't be doing at all except that Hydra has run off with Loki's staff, and they need to get it back. Add in other super powered beings, though, and, suddenly, his running off on his own becomes something of a problem.

The creation of Vision is extremely interesting and well done. There's not much more to say about it than that.

The scene where all of guys try to lift Mjolnir is fantastic. It's one of the best scenes in all of the MCU.

What Ultron didn't do well:
The various mind trips caused by Wanda. It breaks up the flow of the movie and really doesn't add to the story. Even the one by Tony during the opening scene is non-essential despite being the supposed catalyst for creating Ultron. The truth is that that is something that Tony would have been prone to do anyway, and we don't need the fear scenario to make us believe that Stark would act so... rashly. Thor's is used an excuse to give exposition about the infinity stones, and Hulk's... another excuse. They want to show us the Hulkbuster armor? Fine. Really, they want a reason for Banner to want to remove Hulk from Earth, but Wanda's manipulation wasn't necessary for that, either. It all seems like a lot of wasted time in the movie to me.

Ultron. In retrospect, I think James Spader was not the right choice to play Ultron. His vibe is not the right kind of kind of creepy. I think someone more like Kevin Spacey, cold and angry, would have been a better fit. Not Kevin Spacey, because fuck that guy, but someone like him.

Mostly, though Age of Ultron is a transitional part of the overall story. It brings together a lot of threads and, then, sends those thread back out again. It sets the stage for both Infinity War and Civil War and introduces both Wanda, who seems like she will be an essential component of what is coming up in the MCU, and Vision. It also puts Hulk in place for Ragnarok. And introduces Wakanda in a more substantial manner. The movie does a lot. The Ultron part of the story is almost... superfluous.

1. The Avengers
2. Captain America: The First Avenger
3. Captain America: The Winter Soldier
4. Iron Man
5. Thor: The Dark World
6. Thor
7. Guardians of the Galaxy
8. Avengers: Age of Ultron
9. Iron Man 3
10. Iron Man 2
11. Incredible Hulk (It's Norton's fault this whole Black Widow/Hulk romance thing was introduced at all. Betty Ross would have been around as the Banner's love interest if Norton hadn't killed the sequels.)
Posted by Andrew Leon at 12:00 AM