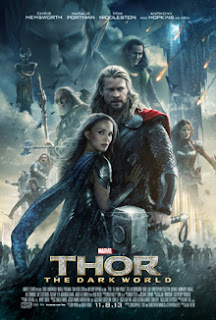 So it seems that my general feelings about the Thor movies may have changed over the years. You can read my initial reaction to this movie here. Actually, I'm sure any shifting in feelings about the movies has to do with my feelings about the MCU and how it differs from the MU, which is fine and good. It's a much different time and place now than it was in the 60s when these characters where first being born, and the MCU should be reflective of that, not trying to force a forgotten (except by Boomers) culture on us. Back when these movies were being released, I was still reconciling the difference.

Basically, that means I have come to like the Thor movies, overall, more than I did upon their releases, at least these first two. I love Hemsworth in the role and can't think of anyone who could do the job better than him.

That said, I think I still prefer The Dark World to the first Thor movie and the reason is, simply, Loki. Loki is much more... Loki... in this one, which is as it should be. Also, I don't know of anyone who could do Loki better than Tom Hiddleston, though, thinking about it, I wouldn't mind an Owen Wilson interpretation of the character. I guess they provided the next best thing by having Wilson in the Loki TV show.

I think Natalie Portman is better in this one, which, for me, isn't saying a lot. She's the weakest part of the Thor movies for me. I don't know why, but I have a hard time with her as Jane Foster. Or maybe it's the way the character is written. She gives off a very damsel-in-distress vibe that I find off-putting.

On the other hand, I love Kat Dennings and Stellan Skarsgard, so there's that.

Jaimie Alexander doesn't get enough props for her performance as Sif. Sif, in general, doesn't get enough attention. She's a great character, and Alexander is wonderful in the role. For Dark World, in particular, the looks she shoots at Foster are gold. And, yet, when she's called on to save Jane, she does it without hesitation.

The biggest change for me upon looking back at the Thor movies is that I have changed my position on the Fandral situation. Possibly, it's due to my general feelings about Zachary Levi working in my subconscious over time, but I think he's much better in the role than Josh Dallas. Of course, the part calls for Cary Elwes but, then, they would have had to kill Fandral in much the same way that Shakespeare had to kill Mercutio.

The only real failing of Dark World is the dark elves. I think that the white masks are supposed to be sinister. Or, maybe, creepy. They're too close to the comical line. I don't understand the reason for the masks. Maybe they're part of the source material; I don't know, but there's no reason provided for them. Then there's Eccleston as Malekith... Fortunately, the role doesn't ask for more from him because the level of acting provided there is about all he's got.

Speaking of the dark elves, why do they have eyes? This has nothing to do with the movie: It's just an errant thought that went through my head as I was thinking about the masks. They are a race born in darkness, before light even existed: Why do they have eyes? No, see, if they had been eyeless, that would have been freaky. Nightmarish, even.

Final analysis is that I thoroughly enjoyed The Dark World. You get not only the Loki-est version of Loki, but you get to see Thor really coming into his own. A Thor who will stand up against his own father, which is no small thing when your father is Odin, to do what is right and is willing to take the consequences for those actions. It's a complete reversal of the Thor we see in the first movie, a Thor who is rebelling against his father for his own glory and is pissed off that there are consequences.