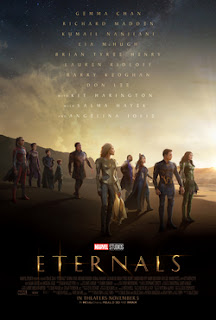 Eternals is a bold choice for Marvel. Of course, so was Guardians of the Galaxy and Captain Marvel. And Black Panther and Shang-chi. Even Iron Man. But I feel like Eternals is an even more bold choice, and I'm really wondering/excited to see where they're going with this new phase of the MCU.
Why do I say it's bold? Because it takes Marvel cosmic. But Guardians, you may say... and Captain Marvel... and Thanos! And the Infinity Stones! My god, man, Marvel has already been cosmic! Yeah, sure, but not in more than a Star Wars or a Star Trek way. We've been used to aliens for a long time, and the Infinity Stones, while alluding to Marvel's cosmic origin story, are still just "artifacts" (they're not, really, but I can't think of a better word). Eternals takes us beyond that to the very origins of the Marvel Universe.
Honestly, I think it offends some people (right-wing conservative fanatics). The whole concept of the Eternals and the Celestials is pretty much blasphemy to "christians." I don't know if that's where all the heat is coming from over this movie, but I do know that Eternals is taking some, and it can't be because of the movie itself, because the movie is very good. It's a very solid Marvel movie.
Just for the sake of comparison, when Warner Bros. made Justice League, the best that they could come up with to introduce new characters was to have Batman walk around with their data sheets and be like, "This is Aquaman. He's the king of Atlantis. He can talk to fish. This is Cyborg. He's a robot. This is Flash. He's fast." Stupid and clumsy as hell. Eternals introduces all 10 new characters organically as part of the story. There is no looking at file cards to tell who people are. Marvel knows how to tell a story and how to introduce characters and concepts naturally.
Eternals is a big movie. It's close to three hours long and introduces a lot of new things to the MCU. There are connections here that are never explicitly addressed, so it will be interesting to see how all of that plays out. And, since this is a movie review, I am not going to start speculating about how all of this relates to other upcoming projects, though I do have... thoughts. Anyway, it's nearly three hours and never boring (unlike some other movie (Warner Bros) of similar length which just came out and is nap worthy).
A few highlights, since my review is getting a bit long:
Kumail Nanjiani as Kingo. He stole almost every scene he was in. The Bollywood dance scene was amazing. I want a Kingo solo movie, now.
Also: "Thor used to follow me around when he was a little kid; now, he's a famous Avenger and won't return my calls." Or something like that.

Dane Whitman. He's been one of my favorite Marvel characters since I was in high school. I can't wait to see what they're going to do with him in the MCU.

The Uni-Mind. Just because Marvel actually did it. It's part of the Eternals mythology, but it didn't occur to me that Marvel would bring that into the MCU. I'm sure we'll see that again.
I think the weakest part of the film is the Deviants. I hate the whole monster made of tentacles look to them. Yeah, I know that's just me. But there's also the sudden unexplained ability of at least one of them to absorb powers. I can't say it wasn't addressed because the Eternals are totally like, "Shit, how can it do this?" but there is never an answer to that question. And, you know, sure, sometimes in life there are no answers to the questions we have, but I like my fiction to not leave things like that dangling. Of course, it's always possible that it's something that will come back in another movie. I'm sure we haven't seen the last of the Deviants.
While it's true that Eternals is not the best of the MCU -- but c'mon! There are some incredible movies in the MCU, and it's unlikely that a few of them well ever be topped -- it is a far cry from the worst. (Sorry not sorry Edward Norton, you're not getting out of that hole.) I want to see it again, actually. It's a solid entry into the franchise and one that, I'm sure, is taking the MCU in a new and different direction
Posted by Andrew Leon at 12:00 AM