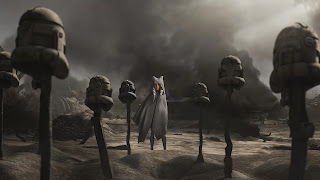 I don't have much I want to say about this episode. In other words, I have a lot I want to say about this episode but only with people who have also seen the episode. They did an extraordinary job entwining the plot with the events of Revenge of the Sith, including the ramifications of Order 66, of which Ahsoka feels the full effects. So does Darth Maul.

I talked about some of this in the write up for the previous episode and, honestly, I don't remember what was in the specific episodes at this point. It was more like a movie that had been split into episodes for viewing. I'm sure that's how they meant it, to feel like another movie.
Let's just say the ending is poignant and highlights the differences between Ahsoka and Anakin. I hear there's are some new fan cuts, four hour fan cuts, of Revenge with this final arc of Clone Wars edited in. I may actually have to watch one because I think seeing the divergence of Ahsoka and Anakin, here at the end, would be interesting to watch as it's happening to each of them.

As it turns out, especially with what seems to be Ahsoka's new upcoming return to the live action side of things in the SWU, this is essential viewing. It's definitely top three of all Clone Wars stories.
Which brings me to my issue with season seven...
After the quote.


Yeah, only one. I was too busy watching to write them down.

If you go back and look at my earlier reviews of the unfinished episodes which were to make up season seven of Clone Wars, you'll see that there are eight episodes reviewed. Four of those were the episodes dealing with the Bad Batch and the search for Echo; the other four were fucking brilliant and, as I said in my reviews at the time, possibly my favorite story arc in all of Clone Wars.
And they cut it.

Not that I don't understand why they cut it: They basically re-did that story in Rebels -- because it's an important story and part of the lead up to Rogue One -- before they knew they were going to go back and finish season seven, so it makes sense they wouldn't want to re-present a story about finding a giant Kaiburr crystal. It doesn't matter that the Clone Wars one was actually first. People wouldn't see it that way.

But, fuck, the Clone Wars story was so much better. I'm probably going to have to see if StarWars.com still has it available, because I would now like to watch it again. And part of what they replaced it with was the lackluster story of Ahsoka and Trace, which was completely unnecessary. But, you know, they had to have four more episodes about... something, so now I know why those felt so throwaway. They were. That's what they came up with to fill the gap of the story they took out.

I guess it comes down to this: Rebels was fine. It was a completely enjoyable show, but it was really... usually, would say popcorn, but I think it was more like rice cakes. And it was specifically meant to appeal to kids. Clone Wars had substance. And I miss it. And I wish they would bring it back.
For good.
Posted by Andrew Leon at 12:00 AM