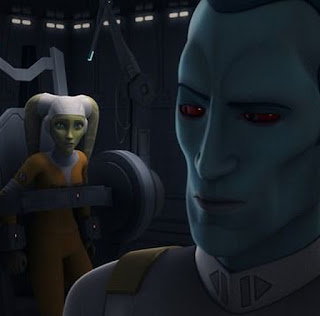 Well... I know I have occasionally mentioned the reluctance in Star Wars for there to be meaningful sacrifices by the characters. That's generally true. Right up until it isn't.

So Hera was captured last episode, and it goes without saying that there will be a rescue attempt. I mean, half of Star Wars is rescuing people from being captured, right?

I don't know. This episode is an actual punch in the gut. Hera finally declares her love for Kanan and...
well...
That's all I can really say.

"If we get spotted, we'll be at a pretty big disadvantage."

"Where do we get these gliders?"
"Easy. We make them."