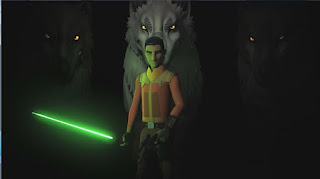 Ezra sees a window to get Lothal out from under the thumb of the Empire; the problem is that rebel command has written Lothal off as a planet that can't be helped. Which is totally understandable considering the fact that they lost their entire attack fleet (mostly fighters) when they went after the TIE Defender program. Every last ship. The cost of Lothal is just too high.

But in many ways, Ezra is the last Jedi -- Sure, Ahsoka is out there, and so are Yoda and Obi-Wan, but they've all retreated into hiding, which only leaves Ezra out in the world. Alone. -- and he has a plan.

Most of this episode is battle sequences, including a duel between Ezra and Rukh. Exciting stuff.

The episode is also fairly typical, story-wise, which is fine. It's an exciting episode. However, there is, for me, a major flaw with the story, one which is too spoilery for me to talk about. I'll just say that it would have been a much more interesting story if they'd gone the other way with it rather than sticking to what is stereotypical for these kinds of things. Maybe there would have been too much involved in doing that in a series that's winding down; I don't know.

But the episode has Hondo, so I can't complain too much, even if they did have him throw himself all in with the rebels. I get it. They have to tie up all of the loose threads, and Hondo needs an honest-to-goodness happy ending, kind of like Han in Jedi.

"He talks a lot for a smuggler."

"For that boy, there is nothing I would not do." -- Hondo

"This is the risk you take when you are a pirate."
Posted by Andrew Leon at 12:00 AM