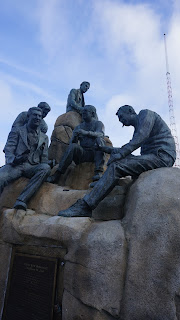 If you ever visit Monterey -- and you should -- you will notice a large... I don't know; is it a statue? Is it a bunch of individual statues all perched on the same rock? Is it a monument? Whatever it is, it's there on the waterfront in Cannery Row. The picture above is just the top of it. There are more figures all over the rocks of the "monument." It's a dedication to Steinbeck and the people who populated his stories. You can't see it in this picture, but there are also frogs all over the statue. Monument. Thing.

Cannery Row wasn't always called Cannery Row. It was, however, the area on the waterfront in Monetery where all of the sardine canning was done and, when Steinbeck wrote his novel about the area, he called it Cannery Row. Later, the city changed the name of the location to Cannery Row. There are no longer any active canneries there, but it is the location of the Monterey Bay Aquarium, which is housed in one of the old canneries.

It's been a long time since I read any Steinbeck, probably 20 years or more, so it was really nice to slip into Cannery Row, which I picked up at the Monterey Bay Aquarium back in January. And you do slip into the novel, kind of like walking into town on the beach trail from Pacific Grove, which is what we did. Just without any of the interesting characters that populate the novel. But, if they'd been there, we would have slipped in amongst them completely unnoticed, probably as Steinbeck himself did.

His power is his characters. Especially since there's not much actual plot. Things happen, sometimes funny things, sometimes tragic things, but they happen and you move on and, mostly, you never return to those things again. It's about the characters and their lives. And, well, throwing a party. Also, there are frogs, so, when I was reading the novel, the monument thing and the frogs all over it suddenly made sense.

The book has the feeling of sitting around with buddies, maybe drinking a beer, or, maybe, drinking Eddie's special hooch, and recounting stories -- "Hey, remember that time...?" -- or telling them to some new member of the group who hasn't heard all of the ones. And maybe that's really all it is. But it was nice to sit with them and listen to their stories, and it made me wish I had been there to be a part of them. Which, I suppose, is as powerful as a book can be.

It also made me want to get back into other Steinbeck, which, also, is as powerful as a book can be.
"I want to read more of this." Steinbeck has always been one of my favorite authors, but you can forget why when you've been away for a while. This book reminded me.
Posted by Andrew Leon at 12:00 AM