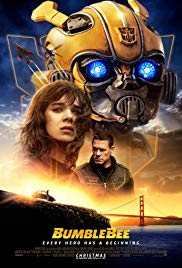 I haven't made it a secret on here that I have a Transformers bias but, then, I also haven't made it a secret that I thought at least the last two Transformer movies were trash. Though I can't seem to find those reviews now (I'm sure I did them?) through a keyword search, and I don't have time to dig back through my posts individually to find them. Let's just say that the cancellation of the two planned sequels to The Last Knight was well deserved. I'm still kind of boggled that Bumblebee survived the crushing failure of Last Knight.

But it did survive, and I'm so glad it did because it is easily the best movie of the franchise, and I really liked the first Transformers movie a lot, though I have to say that the opening sequence in Bumblebee, the last defense of Cybertron and its fall, is by far the best scene in any of the movies. By far. They managed to perfectly capture the feel of the generation one Transformers in basically every way. And my son nearly exploded in geeky happiness when Soundwave popped up onscreen. The opening scene is worth the movie, and that's saying a lot because the movie is good. I'm very glad I made it to the theater to see it rather than having to watch the DVD release. It's worth the big screen.

All of that said, the movie does have some issues, small ones, but some of them are worth noting. Primarily, the family dynamic in Bumblebee is very similar to the one with Sam in the first Transformers movie, the only deference here is that the dad is a stepdad and Charlie is having issues because the rest of her family seems to have moved on since the death of her father. So, yeah, the protagonist has orphan syndrome, which I could have done without. And, honestly, I'm ready for Hailee Steinfeld to move on to some role other than out-of-sorts orphan. She plays it well, but it seems to be the only role she gets cast in.

Not that I was bothered by the orphan thing during the movie. I didn't think about that until after. Which means the movie did its job and let me suspend my disbelief. I'm sure in no small part due to Steinfeld's expertise in that role.

John Cena was a lot of fun, too, even as the misguided villain. Jorge Lendeborg was also great and played the lovestruck companion pretty well. And, now that I'm thinking of all of this, I'm kind of bummed that this was a one-shot movie (at least at the moment) because I would like to see a lot of these characters again. Even Jason Drucker as Otis, Charlie's younger brother. He was appropriately annoying and oh so 80s with his fixation on martial arts.

But I digress... I was talking about issues with the movie.
I think the biggest one is the plot hole it opened in the series. In one of the previous movies -- Last Knight, I think -- there is a photo of Bumblebee during World War II (or maybe WWI?), but this movie heavily implies that Bumblebee has never been to Earth prior to this trip. It's not explicit, though, so maybe it's not a plot hole at all. Still, it's been bothering me.

Yep, okay, that's about it. Well, other than the movie being pretty standard in terms of plot. But they pulled it off with style, and I'm okay with it. It was a lot of fun, and I'm ready to see it again.
Posted by Andrew Leon at 12:00 AM