The Cheese Board Collective (a food review) 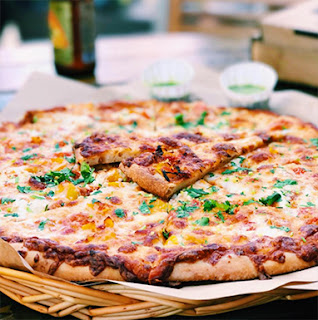 This all began several years ago. There was this list of the top 100 pizza restaurants in the country, and I decided to check it out, in no small part because my middle child would subsist off of pizza alone if we would let him. Which I get, I was the same way when I was his age. As it turned out, many of the top pizza places are right here in California -- no surprise, actually -- and three of them are (or were at the time) right here in the Bay Area. I added a couple of them to the list my wife and I keep of things we want to do or try. Yes, we do actually keep a list for that because we, or at least I, would forget them if we didn't keep a list.

Some of the things on the list, especially the restaurants (because we don't go out to eat all the often), we will never get to, and we probably wouldn't have gotten to The Cheese Board except that my wife had an overnight event (that we may discuss later but not right now) down in Oakland a few years ago and we had to eat out a few times. We decided to drive through Berkeley on our way home and have dinner at The Cheese Board because it was the place off our list that my wife most wanted to try.

There are a few unique things about The Cheese Board:
1. It's a collective, meaning that it's owned by the employees. On top of that, all of the employees, no matter what they do, make the same wage. It's all pretty cool.
2. It's not just a pizza place. Actually, it's a cheese shop, or that's what it started out as. Or something. The pizza came later.
3. The pizza only comes in one size. You can buy a whole pizza or a half pizza. Or, hey, even two whole pizzas!
4. They only make one kind of pizza per day, so, if you want a pizza, you get what they made not what you choose.
5. All the pizzas are vegetarian. Not in the traditional sense of pizzas; these pizzas are... creative. Both in the veggies used and the kinds of cheeses.
Remember that line in Inside Out? You know, it went something like, "Thanks, San Francisco! You ruined pizza!" Well, The Cheese Board would be a perfect example of what Mr. Anger was talking about... except that it's SO GOOD.

I don't remember what was on that first pizza we had, but I'll admit to being a bit wary of it. I like some veggies on my pizza, but I've always been more of a meat pizza person. Though, actually, now that we make pizza at home, I've come to realize that, when done correctly, the veggies add much more flavor than the meat. It's just that you're never going to get more than token flavor from veggies, or even the meat, from any chain pizza place. They don't do the right prepping to bring the flavor out of things. Red bell pepper, when properly grilled, is a flavor explosion on your pizza.
But I digress...

So, yeah, I don't remember what went on that first pizza, but it was nothing less than amazing. What I remember most about it was the incredible cheese. And, again, I'm not really a fan of "cheese pizza," because what's the point? Except, again, I've come to realize that my feeling about that has more to do with the failure of chain joints to provide anything more than melted cardboard on their cardboard crusts. The pizza we got at The Cheese Board was enough to rocket that place to my pick for pizza place ever.

And I'm not alone in that. There was recently an article (and, yes, I should have saved the link, but I didn't, and I'm not going to go look for it) about how The Cheese Board is one of the top three restaurants -- not pizza places, restaurants -- in the nation. It's certainly one of our favorite places to go... when we're anywhere near it. Last week, when returning from Monterey, we made a very deliberate detour through Berkeley just to stop for pizza.

Look, even my younger son loves it, and he doesn't eat vegetables unless we make him.

That first visit aside, since then we've had pizza with corn on it... Yes, I said corn! And, yeah, I was like, "What...?" when I saw that on the menu for their pizza that day, but it was... Unbelievable. I mean, it was corn! On pizza! But it added this bit of flavor that really worked.
And, yes, we've had pizza with broccoli.
This last time we stopped, it was bell pepper and olives.
I think that's it, just the four visits over about three years
I'd go more if I could, but my wife is convinced, no matter how good it is, that a two-three hour round trip is too far to go for pizza.
Posted by Andrew Leon at 12:00 AM