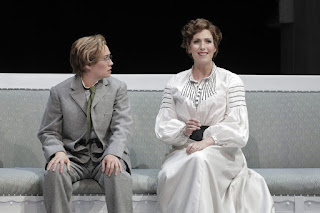 All right, so, remember back to my review of Elektra where I said that it kind of put me off Strauss and that that might not be fair? Of course, you don't, which is why I put in a link so that you can go back and look. As it turns out, it wasn't fair. Not that I like Elektra anymore than I did at the time, but I thoroughly enjoyed Arabella, one of Strauss' comedies, a romantic comedy. A romantic comedy with those Shakespearean kinds of mistaken identities going on.

And the music was much better.

Not to do a plot synopsis (because you can look that up if you want to know what it's about), but I'm going to give you a little of the set up... because it's funny, and you can probably figure out where some of the humor in this piece will come from once I tell you.

Count Waldner has come down in the world, and he and his family are living out of a swanky hotel. Which may not sound like he's doing too terribly, but that means he's had to sell off his ancestral home and, evidently, he's behind on what he owes to the hotel, too. Through the course of the opera, we learn that he has a gambling addiction; maybe not the actual original source of his family's financial woes, but he's certainly not helping anything.

The count and his wife have two daughters, but daughters are expensive to bring out into society, so they have raised the younger daughter, Zdenka, as a boy, at least as far as the rest of the world is concerned. Which includes Zdenka's best friend, Matteo, who believes Zdenko (notice the spelling difference) is his bro. The count and his wife are trying to marry Arabella off to some rich suitor so that they can get some money out of the deal. Of course, Arabella wants none of that; she wants to marry for love.

To complete matters, Matteo is in love with Arabella, whom he used to "date," or whatever you'd call what they did, but Arabella is over him and has no interest in him. However, Zdenka is in love with Matteo, who thinks she's a boy.

I'm sure you're getting the picture.

And I haven't even mentioned the guy who shows up in love with Arabella after only seeing a photograph of her! But that's handled relatively believably, so it wasn't a problem.

For once, I wasn't really impressed with the set. It was interesting in its versatility, as they used the same main two set pieces (large pieces!) in different configurations to make the different rooms and things, but it all seemed a little too elaborate to me for something that could have been much less so. I mean, if there was ever an opera that could have gone for a minimalist set design, this was it. Basically, the set overwhelmed the preforms, especially since most of the time there are only one or two people on stage.

The cast was good, especially the father and the daughters. Richard Fink (Count Waldner) was delightful as the card-obsessed, gambling dad who was constantly trying to figure out where he could get some money and get back into the game. His expressions were great, meaning he was a good actor on top of being a good singer.

Ellie Dehn (Arabella) and Heidi Stober (Zdenka), both of whom I've mentioned from other operas, were great and worked well together. Great sister chemistry, even with one of them dressed as a boy. Which kind of makes me wonder, now, how old Zdenka was was supposed to be, considering that she's referred to as a "boy" in the opera and Arabella is only at the age of being presented to society (so I'm kind of thinking that Arabella must be something like 16 or 17?). And Matteo is a soldier and trying to woo Arabella, so I'm thinking he must be around 20? But his best friend is still referred to as a kid, basically. And, well... Well, that would be telling.
Boy did I digress...

Anyway! Dehn and Stober are great together. And great individually.

What this opera did for me for sure was change my opinion on Strauss. At least as a composer. My thoughts on him as a person are bit more conflicted, but that's a story for another time.
Posted by Andrew Leon at 12:00 AM