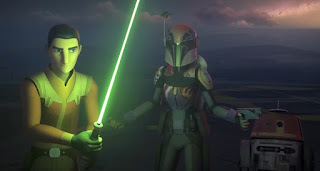 -- "Strategy is an art. Maybe I'm luring you into a false sense of security."

Oh, wow, it's been a while since I've done one of these. I've just been busy, I guess.
But this was a good, and exciting, episode to jump back in on.
Of course, the Mandalorian stuff is always good. Or, at least, interesting. This one was both.

This episode ties back to... oh, I don't know, some episode or other, back in season two, I think. Another Mandalorian episode, but I'm not going to go look it up, right now. At any rate, in the earlier episode, the Rebels cook up a deal with a Mandalorian outpost for safe passage through their system.  But that outpost has gone silent, so Ezra and Sabine, along with a "guest," go to check it out. They fear the Mandalorians may be setting a trap for Rebel ships passing through the system. Oh, the deal? Well, it wasn't exactly reached by choice on the part of the Mandalorians.

When they get there, though, the find that the base has been wiped out, everyone killed. Those responsible? Imperial Supercommandos. And they are pretty cool looking, let me tell you. They are also traitor Mandalorians who joined the Empire, which is part of why they're so cool. They're like hybrid stormtrooper/Mandalorians. And what kid didn't want that action figure back in the 80s?!?! Or now, probably.

The episode is actually a lot more complex than what I've gone into here, but, hey, no spoilers, right? Well, I guess I kind of did give a spoiler about the commandos... excuse me, supercommandos! But, hey, it's in the title, so I'm going to give it a pass.

And, well, we find out a thing about Sabine, and I think that's going to come back to haunt her. Or us. I am writing this on Halloween evening, so I'm going with the haunt... Hey, you know what? No one ever goes trick-or-treating as a ghost anymore. Did Charlie Brown ruin it for everyone?
Maybe no one ever went as a ghost? Except me... Because I did, sort of, when I was 11: the ghost of Scooby Doo. Yeah, I'm not going to explain that.