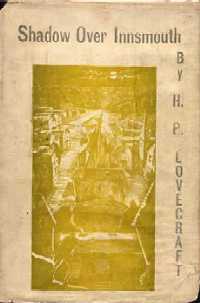 As I've mentioned before, Lovecraft was not very successful in his day. In fact, he was decidedly unsuccessful. Fans of Lovecraft like to say that it's because he was before his time, but, no, really, it was because he was a bad writer. He had interesting ideas, but his writing was mostly shit. No one would know who he was if this other author hadn't come along after he died and had the thought, "Huh. I can do something with this Cthulhu stuff." There's a reason Shadow Over Innsmouth was Lovecraft's only published book.

Part of me wanted to like this one. Lovecraft spent some time and really built this one up. He made it seem as if it was going to be something. Go somewhere other than where Lovecraft usually goes. You've got this student interested in architecture travelling through New England in order to take in the sights and see the buildings. He doesn't have much money, so he's travelling as cheaply as possible and, thus, discovers Innsmouth as a cheap detour to get to where he really wants to go. But he's intrigued because the people of the neighboring towns don't like Innsmouth or the people who live there.

Of course, in true Lovecraft style, this is all flashback. The protagonist is telling a story from his youth that was so horrifying that he hasn't shared it with anyone since it happened... until now. And, this, actually, is what causes the story, ultimately, to fail.

Yes, there will be spoilers. You should be able to tell by this point that I didn't care for Innsmouth which may be all you need to know. If you don't plan to read it, though, you may as well read on.

Lovecraft has a severe issue with logical inconsistencies. I suppose this isn't an issue for people who don't think about what they're reading, but I do, so his inconsistencies tend to stack up for me as I read until his stories lose cohesion. I suppose that's what makes his shorter works somewhat easier to take: They're not long enough for him to contradict himself too much or stick in very much information that just plain doesn't make any sense.

For instance, when the protagonist arrives in Innsmouth, already set against it due to the driver of the bus he arrived on and his reception at the hotel (or whatever it was), he seeks out some non-natives...

Wait a minute; this already doesn't make any sense. Everyone in the surrounding towns hates Innsmouth and there are no people from outside of it who live there. The town is dirt poor with no economy, so there's no plausible explanation for anyone to be commuting into Innsmouth for work... And, yet, there is a boy from one of the neighboring towns who works at a grocery store in Innsmouth. On the flimsiest of reasons. But Lovecraft needs this non-native boy as a plot device so inserts him and tries to brush it off with a lame excuse.

Basically, he needs the boy to up the creepy factor by offering an exposition on what life is like inside the town. Then he has the boy sketch out a very detailed map of the entire town, including all of the street names, in just a moment or two, a map which the protagonist refers back to throughout the story and that Lovecraft uses as a device to give the protagonist an almost clairvoyant knowledge of Innsmouth. You know, something like he would have had if he'd lived there all his life. I was annoyed every time he pulled out that map.

The thing that breaks the story, though, is Lovecraft's insistence on the twist ending. Where did that even come from? Was it Lovecraft? I don't know. I just can't think of anyone who wrote earlier than him that did that shit. Forcing in the twist endings doesn't work out in the long term, just ask Shyamalan.

Which is not to say that the whole Lovecraft experiment has been a waste of time, but the experiment itself has been valuable. More on that when I finish the last few stories I have to read. And, boy, am I ready to be through reading them! Like I said, Lovecraft is mostly a shit writer.
Posted by Andrew Leon at 12:00 AM