A Thinker's Book of Dangerous Knowledge (a book review post) 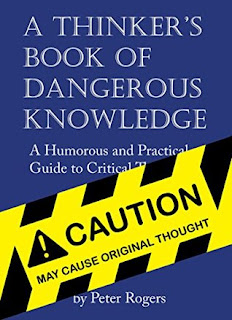 Some book reviews are more difficult than others. Which probably goes without saying except that I don't think it does since a "review" for most people amounts to "I loved this!" or "This sucked ass!"
Of course, those hardly qualify as reviews, but that tends to be the state of the world, and there's not a lot in between.

There should be a lot in between.

The stuff in between often requires a lot of thought, though, which is kind of the point of this book.

So let's get it out of the way that I know Peter. Like for real. Like he lives a few blocks away, and we go over to his house sometimes to do things like play Cards Against Humanity. I've known Peter for pretty close to 20 years now.

We like a lot of the same things, so I get all of the jokes and references in the book. However, there are a lot of them. At some points, I would say that there are too many, that the jokes detract from the message. I say that as someone who gets them. If you're not a Monty Python fan or a Doctor Who fan or... well, a fan of any of the other things frequently referred to, then this book isn't going to work for you. You're just going to end up confused by all the things you're not getting. And that's too bad, because there is some worthwhile material in here. But Peter has created his book, probably inadvertently, to appeal to fairly niche audience, most of whom probably don't need a book like this to begin with. The people who need the book are the ones who have the jokes flying over their heads.

Which would be the time to tell you that if you are unfamiliar with Monty Python et al. that you should probably check them out, because everyone should have some kind of passing familiarity with... things, but that reminds me of another thing from the book, because Peter mentions so many times that you should run out and buy... whatever he's referring to at any given moment, like the complete collection of Flying Circus... that you'd think he's getting paid for product placement. Or getting a commission on sales, and I'm pretty sure that's not true. Pretty sure. At any rate, while it's amusing to be told to run out and buy some other author's books once or twice, after a while, you begin to wonder why you're reading the book in your hand.

And that thought isn't helped by how often Peter tells you that you probably shouldn't be reading his book, anyway. Self-deprecating humor only goes so far before you start to believe the person saying it.

All of that aside, it's not a bad book. Despite that it deals with kind of a heavy topic, Peter keeps it light, and it moves along fairly quickly. If you're unfamiliar with more formal thinking strategies, this book could be part of a good introduction. It's the kind of thing that can put you on the right path, though it's not really the path itself.

I could go on about all the whys and wherefors, but in this day and age when the word on any given day consistently has something to do with "fake news," thinking and how to do it and why to do it ought to be something everyone is, well, thinking about. Especially before you forward any news bites. Or, even, before you believe what the President #fakepresident is saying. So the book isn't perfect and could use some shoring up in places (like the section about deductive vs. inductive reasoning), but it's a good start.

A good start which will never be seen or read by the people who need it most, which is, unfortunately, most people. Because most people never move beyond their search for confirmation bias and most people don't read... Hmm... There's probably a connection there.
Posted by Andrew Leon at 12:00 AM