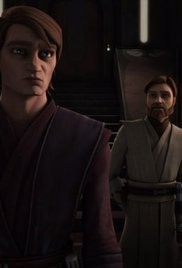 -- Disobedience is a demand for change.

The episode begins with a debate over the -- I want to say morality, but they're not really debating the morality of it. -- effectiveness of carrying attacks against the droids within the populated areas of the city. You know, on the one hand: It's war. On the other hand: Innocent civilians could be killed. This, then, is the debate over whether they are, in fact, a terrorist group as the illegitimate king has labeled the rebel band. I wish they had given this debate more than a few lines but at least they had it, right?

We also get more of the debate over how much involvement the Republic can officially have in the conflict on Onderon. To some extent, this reminds me of the doctors who would go to duels a couple hundred or more years ago but would turn their backs so that they could say they didn't see anything happen. It's ridiculous, but it's a thing that actually used to happen and things like this continue to happen, so I can't exactly say that the political game that the Jedi are playing here isn't really realistic. Maybe that's why it's infuriating: because it is realistic.

But we get an appearance by Hondo out of it, so how can I complain?

We also are introduced to some devastating new droid gunships. And, for some reason, a nod to Battlestar Galactica. Maybe that has happened before; I can't remember.

This episode, more than any of the others in this arc, gives us what is probably the most defining moment for Saw Gerrera. I'd say more, but it would spoil the ending. I will say that not only Saw regrets what happens, though. Pretty much the entire creative team was regretful of this one decision, especially considering Saw's transition into the live action world of Star Wars.
Posted by Andrew Leon at 12:00 AM