What Roller Derby Taught Me About Writing

I got to go to one of the practices for the Cinderollas. 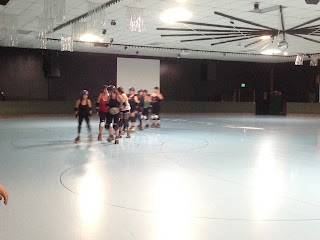 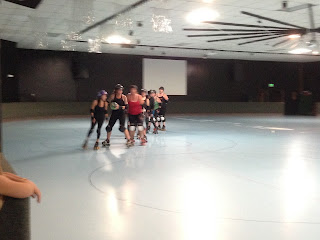 I was watching them warm up, and they started doing this thing with a bunch of balls. Not what's in the above pictures, that was something else entirely. No, what I mean is that when everyone was just there skating around (and there were a lot more people than just the ones pictured because there junior team was there, too, along with some other skaters), they threw a couple dozen of those lightweight brightly colored balls for kids out onto the skate floor.

Let me back up a moment:
As I said in my first post about roller derby, I grew up skating and working in the recreation program at my church. We did skating in the gym, and I was often in charge. One of the first and basic rules of skating was balls and skates don't mix. When I was in middle school, one of my best friends broke his leg because he tripped over a basketball while he was skating. Well, perhaps tripped is too light a word. It's not like it was just there on the floor in front of him and he didn't go around it or something. No, it came rolling across the floor and hit his feet. At any rate, the rule was no skates and balls at the same time (not that we always followed that rule, mind you, but that was the rule, nevertheless).

Needless to say, I was surprised that they were tossing all of these balls out onto the skating floor during the derby practice. They were kicking the balls, throwing them at each other, and, generally, having fun with them. Eventually, when they got ready to actually start practice, they gathered up the balls.

About that time, Dirty Carie, the CEO of the Cinderollas (with whom I'm trying to get an interview), came over and asked me if I had any questions. My initial response was, as is always the case, "No, I don't think so," but I immediately changed my mind and asked about the balls, something like, "What's the deal with the balls?"

That's true for a lot of things, especially physical things for which muscle memory can take over. Often, thinking about it, thinking about what you're doing, can just mess you up. I think we frequently call it "trying too hard."

It works for writing, too. Writers often get too focused on the individual words and sentences. They think they have to only have "useful" words or just the right word or that every sentence has to further the story or be perfect or beautiful in some way. They do word counts on specific words and go back and cap that particular word at some arbitrary number of usages. Or other weird things. It's like thinking too hard about what your feet are doing.

Writers need to just tell the story. Don't think about the words or the perfect sentences or any of that and just tell the story. The better you get at telling the story, the more easily the right words and sentences will fall into place. All on their own, really. It's kind of magical that way. Sure, it takes practice and, sometimes, especially at first, thinking about the words helps, but you can't stay in that place. At some point, you have to play with the balls and forget about your feet. Just have fun in the game and tell the story.
Posted by Andrew Leon at 12:00 AM