We Went to the Opera! (a local color post) 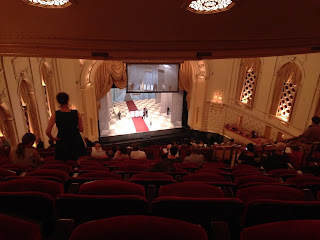 This is a view from the very top of the balcony down to the stage during the intermission and set change. Yes, it is a long way down.
(Sorry, this is the only picture that came out well enough to post it. There just wasn't enough light to get good shots.)

Yeah, that's not small. Our house is, but that stage is still pretty ginormous.

There's a lot I could say about the two trips, too much, now, for one post. For instance, we had car picnics on the way down both times so that we could make it on time. Finger foods, good finger foods, like bits of cheese and apple and olives and tri-tip. My wife fed me (and herself), and I drove, and we talked and had a lot of fun. The second trip, we were also invited to a wine and cheese tasting before the performance with a talk from the chorus master. That's the guy who teaches the chorus their parts. He's been there at the San Francisco Opera for quite a long time.

I could also tell you about the completely rude guy with OWDS who interrupted the presenter during the pre-show presentation about the opera. It was actually the dude (and, yes, he was an old, rich, white dude) and two women, and all three of them had flaming cases of OWDS, though the dude had it the worst. I suppose, though, the San Francisco Opera is a common meeting ground of people with OWDS. That guy really deserves his own post, although I probably won't actually get around to doing that.

There's a short review of the first opera we saw below. I'll do a different post for the other show.

Before I get to that, though, I want to make one specific general opera comment:
The problem with opera is that it is often just people standing and singing. As my wife says, it's difficult to do a lot of movement when you're trying to sing, especially the kind of singing that opera singers do. And, yet, this is not a problem for all opera performers. And, I think, it probably didn't used to be a thing at all. Opera, once upon a time, was performance for the common man. It was the equivalent of going to the movies. I'm pretty sure that opera used to be much more lively and performative, but gentrification has made it much more accepted to just stand and sing.

This opera suffered much from the stand-and-sing issue, especially among the male performers. Mostly, they didn't even bother to summon up any facial expressions. Nicolas Teste as Raimondo was the worst. He was about as flat as a piece of paper. He's one of the main characters and, yet, he often felt like he belonged in the chorus, because he had about as much animation as them. He could certainly sing, but there was no emotion in it, and he rarely moved at all. Nadine Sierra, the female lead, however, was the exact opposite. She was expressive and animated. A performer in all senses of the word. She made the show worth watching, especially how creepy she was in the post-murder scene where she goes off the deep end. Sierra is what more opera performers should aspire to. Opera is not just singing; it's also acting.

The issue with this particular production of this opera was the director. His interpretation of it was to "modernize" it, which would be fine... if he had actually done that. What he actually did, though, was to produce the same period piece that it's supposed to be (with the women wearing big period dresses and all of that and the whole thing in a castle-ish setting) except that the men get to wear suits and some of them wave guns around. It creates a horrible muddle. It did not give the "near future" vibe it was supposed to give at all. Not even close.

Still, it was an enjoyable experience. overall. The singing was, as to be expected, amazing, and, actually, Nadine Sierra was good enough on her own to make the show worth watching even with the other issues of this production.
Posted by Andrew Leon at 12:00 AM