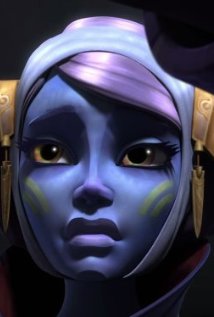 The episode opens with Obi-Wan, Anakin, and company investigating the loss of communication with a clone base on a Hoth-like planet. Obi-Wan's comment that they're in the planet's tropical zone was amusing. They find the helmets of the clone troopers hanging from spears that have been driven into the ground. As they move on and find the same thing with droid heads at a Separatist base, my son said, "Well, this is weird and creepy," which is almost exactly what I'd been thinking, that they'd done a really good job of making the opening creepy. It's something you don't often see in Star Wars, and it was well done.

Of course, it didn't last very long before they got to the actual story, but it was a very well done opening.

The actual story has to do with the leader of the people from a moon in the same system trying to claim the planet as belonging to his people. The problem is that there is an indigenous population on the ice world, and the chairman wants them wiped out. He's trying to use the Jedi and the clones in a war against the Tal so that his people will have claim to the planet.

The other problem is that, supposedly, no one knew about the indigenous population until they came to find out why they'd lost communication with the clone base.

So I think there are some unspoken things going on in this episode, because it's the only way the episode actually makes sense. The first of these is that Chairman Chi Cho knew about the Tal already. Chi Cho is the one who insisted upon a base being put on an otherwise unoccupied planet and, apparently, one that is fairly worthless. Which makes you wonder why Chi Cho so desperately wants to lay claim to the world, but they don't ever discuss that. All of this reduces Chi Cho to a very two-dimensional character who wants all the things and wants all the things in his way to all the things to be killed.

However, the political maneuvering in the episode is interesting, especially following the assumption that Chi Cho knew about the Tal and was putting the Jedi and the clones in a position to go to war with the Tal for him. The episode explores the bounds of authority the Jedi have, and we get to see, primarily, Obi-Wan doing some political maneuvering of his own to bring about the resolution he wanted.

Politics is a big thing in the Star Wars universe. You don't really see a lot of it in the original trilogy, but you know it's there, shown in the dissolution of the senate by the Emperor. Politics is at the center of the prequels, though (and is probably a reason people didn't resonate with them as much), and it's interesting to get to see some of that, especially Jedi politics, in the Clone Wars series. Jedi politics are not much dealt with in any of the movies. Obi-Wan's skill in manipulating the situation is fairly impressive.

Another thing of note:
Somewhere between this episode, in which the Tal are not space-faring, and A New Hope, the Tal take to the stars, because there is a Tal in the cantina on Tatooine. Yes, a Tal, from a snow world, hanging out in a bar on a desert planet. I'd really love to know the story behind that!
Posted by Andrew Leon at 12:00 AM