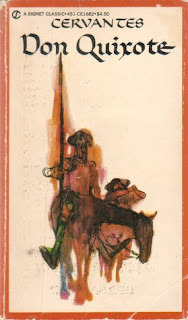 I'm going to start by pointing out the obvious: Don Quixote is a long book. My copy, which is in small print, has more than 1000 pages. This is the main reason why it's taken me so long to read it. Not that I'm daunted by long books, but I would look at it and look at my other books and think that I could read so many other books in the same time it took to read Don Quixote, and that's what I would do. [I had the same problem when I was a kid collecting Star Wars toys. There would be some big item I wanted, like the Millennium Falcon or an AT-AT, that I would save up money to get but, when I got to the store, I would look at that one thing and realize how many action figures I could buy with the same money and end up buying the action figures.] I'm sorry I waited so long to read it.

Don Quixote is a great book full of laugh out loud moments. Now, understand, this is a book that was written 400 years ago. What this tells me, which is something I already knew but this serves as confirmation, is people don't really change all that much. I mean, you have everything here, from Quixote and Sancho puking in each other's faces to political satire to ripping on other authors' popularity despite poor quality writing to statements about the human condition. The book is compelling and a surprisingly fast read. At least it was for me.

Just the basics in case you don't know them: Quixote (not his real name) is a minor Spanish noble in love with chivalry and everything to do with it, so much so that he decides to become a knight. Let me be clear about this: He just decides to become a knight. This would be like just deciding to become Batman. You go out and buy a Batman costume and a bunch of gadgets and start stalking the streets in hopes of finding bad guys to beat up. Essentially, this is what Quixote does. He puts on some armor, gets his nag of a horse, and hits the trails looking for bad guys to defeat in honorable combat. Needless to say, hi-jinks ensue. And a little bit of crazy. Okay, a lot of crazy.

The crazy is best summed up in the whole tilting-at-windmills scene but only because, if there's anything people know about Don Quixote, it's the bit where he tries to joust with the windmills. He thinks they're giants. This is far from the best or funniest scene in the book; people know about it because it happens early. It's like how everyone knows about the Lilliputians from Gulliver's Travels even though the first section, the section in Lilliput, is the least of that book.

Quixote's friends don't like what he's doing and decide that he's gone crazy and needs to be cured. Their method of curing him is to burn all of his books. Books, see, are bad examples. At least, the books about chivalry that Quixote loves are bad examples, so they decide to remove the source of his illness by burning the books. Of course, before they burn them, they go through them and keep for themselves all of the valuable ones or the ones they just happen to like. It's really pretty horrible.

It's also Cervantes method of dismissing authors he thought were hacks (for lack of a better word) and uplifting authors he admired. Including, or maybe especially, contemporaries.

Look, there's a reason that this book is still considered one of the greatest novels ever written. I wish I hadn't waited so long to get around to it. It's well worth the time even if it does look long.
Posted by Andrew Leon at 12:00 AM