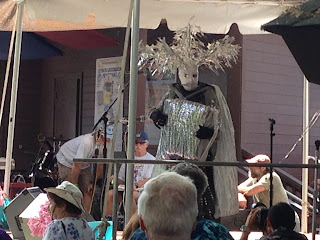 We just had the 25th annual Accordion festival recently, but I don't have a lot to say about it this year. 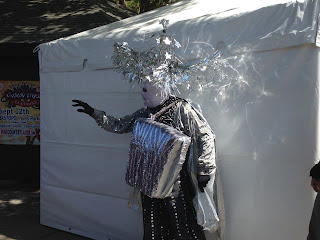 The Great Morgani was, of course, there, but I only got pictures of him in this one costume, this year. 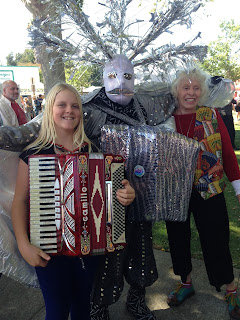 But I managed to get one of him with my daughter and her accordion teacher, so that was cool.

Speaking of my daughter, she did play again this year. I have a video. Actually, I have two, because she played two songs. I'll try to get them configured or something so that I can make them available on the blog.

Other than that, though, we didn't listen to much music. Not actively. My family mostly hung out together and my daughter accordion shopped. This year was the first year for that! We almost even bought one, but that's a story that I'm not going to tell, right now, mostly because it would be anti-climactic.

At some point after we were home, I said to my oldest kid, "I feel like we went to the festival, and I didn't listen to any music," and he said, "Yeah, me, too." Because most of what he did was watch his young cousins. He did, however, listen to the German guy who played some video game themes on his accordion.

So, anyway... The accordion festival did happen; I just don't have a big write up about it this year. I'm sure I'll do a better job next year. Because the only way I could do it worse than this year is if we don't go next year, but that's not actually very likely.
Posted by Andrew Leon at 12:00 AM