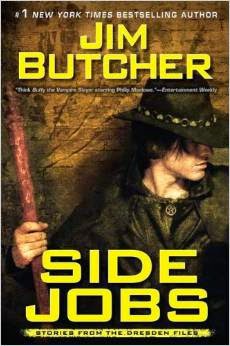 This is Dresden book 12.5. At least, that's usually how it's listed. It falls in between Changes (book 12) and Ghost Story (book 13), but, as suggested by the ".5" designation, it is not a novel. It is, in fact, a collection of short stories that fall within the series as a whole with only the final story falling in between books 12 and 13.

First person is seductive, especially to the beginning writer. It's easy and it feels natural. But, see, it's a trap. When you're writing in first person, the author isn't writing from his/her voice, s/he's writing from the character's voice. The problem, then, is that most authors can't differentiate between their own voice and their characters'. And, you know, that's fine as long as you only ever write the one character in first person. But that's not what usually happens, and it's not what happened here.

Butcher's been writing Dresden a long time. Dresden's voice is distinct. But, see, it's that seduction of the young writer to write in first person, and Dresden's voice is really Butcher's (which is why we get the occasional preachy episode in the Dresden books). It hadn't occurred to me nor would I have ever noticed if Butcher hadn't decided to write from some other characters' POVs in these short stories.

There's a story from the POV of Thomas and, other than that Thomas reminds us that it's him, the story reads just like it's from the POV of Harry. Sure, it's an interesting story with all of the Oblivion War stuff in it, but Butcher should have switched to third person so that it didn't feel like Harry talking.

And there's a story from the POV of Murphy which is only differentiated by the fact that she spends a lot of time talking about Harry and that there are sections describing her hand-to-hand fighting. However, those sections have the exact same feel as Harry describing how he uses magic, essentially making it the same voice. The only other thing is the reference to men speaking Martian, but it's not enough to set the piece apart from all of the Dresden pieces.

A first person character voice should be as distinctive as listening to someone speak in person. Butcher doesn't pull that off, which was more than a little disappointing.

Then, there is the issue that the stories are of vastly variable quality with only a few feeling like they actually added anything to the Dresden world. And when the heck did Georgia become Butcher's Lois Lane? Really, we had to have two different stories about her getting kidnapped? I get that Will and Georgia are the only characters that Butcher has allowed to have any kind of long term relationship and they have to be the default for that kind of story, but, sheesh, damsel in distress much?

All of that said, if you're a fan of The Dresden Files, you'll want to read the book. "Day Off" and "The Warrior" were both very good and, actually, so is "Something Borrowed" (despite the Georgia kidnapping). And, then, "Aftermath" is almost essential reading. Almost. You could get by without it, but it's worth the read to fill in some space between books 12 and 13. And, of course, you get rescue Georgia again.
Posted by Andrew Leon at 12:00 AM