If Chins Could Kill: Confessions of a B Movie Actor (a book review post) 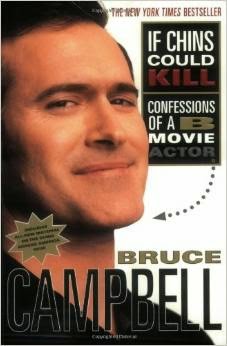 I didn't come by Bruce Campbell the normal way. That is to say, I didn't come by Bruce via The Evil Dead or anything related to it. Sure, I had heard of it. I had plenty of friends during high school who were big fans of the Evil Dead 1 and 2, and I even saw Army of Darkness when it came out, probably opening weekend, but, honestly, I wasn't all that impressed. Also, honestly, I got so tired of all of the "boomstick" jokes. Not that that had anything to do with Bruce; I just had this one friend, Tad, who could run anything into the ground.

I came to Bruce through The Adventures of Brisco County, Jr., one of the most underrated shows ever. Back in a time when I never watched TV (I still don't "watch TV"), I made sure to video tape every episode of Brisco. It made me a true Bruce fan, and I spent years looking for his low budget flicks just to see how they were. Things like Mindwarp, Maniac Cop, and Lunatics: A Love Story. One of my favorites, and one I actually own, is Bubba Ho-Tep; of course, that one came later.

And, yes, I love Bruce Campbell's chin. Almost as much as I love Patrick Warburton's (but we're not talking about him).

Which brings us to the book, If Chins Could Kill. While I frequently see it termed an autobiography, and while it is in fact autobiographical, it would be a mistake to call the book an autobiography. "Autobiography" implies that it is the story of the person's life, and Chins does contain stories, but it's more a series of anecdotes rather than being a story. Anecdotes that aren't always even in chronological order. They more follow along thematically as sections of Bruce's life, so they sometimes shift out-of-order as he changes topics. There's nothing wrong with the book not being an autobiography; I'm just saying that it doesn't really fit into that category as you might expect "the story of someone's life" to fit into it.

As a series of anecdotes, the book is well worth the read. Well, if you like Bruce Campbell, it is. There are amusing stories from his childhood, even more amusing stories from his days when he and Sam Raimi were first getting started, and, well, just amusing stories, at least one of which has to do with Bruce and his own "boomstick." And lots of photographs. Then there's the stuff when he goes to work on Hercules and kind of doesn't come back. Not that he didn't come back, but he chose to spend time doing that and Xena for a long while, much to the chagrin of his agent and others. But, hey, I loved the character of Autolycus; he was the only reason I ever watched Hercules or Xena.

I actually have what I guess is the second edition of the book, and it contains an added section about the book tour itself. That was the section that I found most interesting. Maybe it's because I'm an author or maybe it's because he talks a good bit there about his interactions with his fans, but, whatever it is, I'm glad they threw that section in.

What it all comes down to is this:
If you like Bruce Campbell and are interested in getting a look behind the curtain at how bits of Hollywood work, you will most likely enjoy this.
If you're not a fan of Bruce or you don't know who he is from a can of Campbell's soup, you should give this a pass.
Posted by Andrew Leon at 12:00 AM