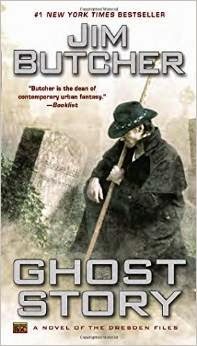 Here's the warning right  up front:
This review will be full of spoilers. Not spoilers about this book, specifically, but about the series in general. If you even think you might want to read these at some point, you do not want to read this review. At all. Any of it. If you are reading this series but aren't this far, yet, stop reading right now. Seriously, go find something else to do. Just be satisfied with me saying that this book is good, and go away. You will only be mad if you go farther.

Is there anyone left? Just Rusty? (Because he's read them all.) Oh, well, I'll just go ahead anyway.

The end of book twelve, Changes, leaves us with a major "cliffhanger." I say "cliffhanger" because it's not really a cliffhanger. A cliffhanger is when a story ends before the climax is resolved. In Changes, the climax is resolved, but a horrible thing happens during the denouement: Harry is killed. At least, as far as we can tell, Harry is killed. I can understand why people who were reading these as they came out were really pissed by the ending. I would have been pissed, too. Fortunately, I didn't have to wait, because I had Ghost Story (and Side Jobs) sitting here waiting for me when I finished Changes.

As the story hints, Ghost Story opens with Harry's ghost. He has, evidently, been killed. Why else would his spirit be roaming free, right? And that is the $64,000 question. And it's a question the book asks almost right away, but it takes Harry some time to figure it out. Which was, all things considered, kind of surprising. I mean, when someone tells you, "There were some irregularities with your death," you ought to start thinking things.

My big issue with the book is the whole "ghost whisperer" angle, and I mean Ghost Whisperer just like the TV show. Butcher even acknowledges it within the book, but I can't help but think, "Really? That's what you had to go with?" I don't know; maybe, that whole "unfinished business" notion is so pervasive that it's the only reasonable option you can go with, but it annoyed me.

I have to say, I didn't see that coming as more than a "nah, that couldn't be it" possibility in my head, and I kept trying to figure it out. I was surprised when that "nah" thought was the correct one, so that was pretty well done.

Look, this is what it comes down to:
If you've gotten this far into The Dresden Files, you must like them. Why would you read 13 books into a series you don't enjoy, right? If you like Dresden, you're going to like this book. It shows us a whole new side of the Dresden world despite the ghost whisperer issue. There's not much else to be said about it.

Oh, and I didn't see the end coming. I don't mean the answer to the "who shot Harry" question; I mean what came after that. That's going to make you happy that book 14 is already out.
Posted by Andrew Leon at 12:00 AM