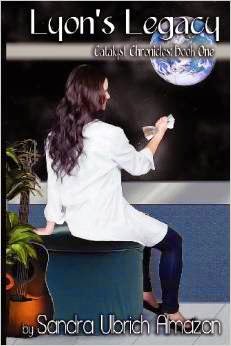 To be honest, this book didn't work for me right from the start. And the sad thing there is that I really wanted it to. I just couldn't get past the premise. The idea here is that sometime late this century there will be born the great-granddaughter of a 1960s pop star. And that's okay except that, evidently, this guy was such a huge star that people still recognize her (all of the family) when she's walking down the street and come up to her all starstruck about her great-grandfather. But, see, we barely care about the kids of famous people, now, unless they become some kind of star in their own right. This book expects me to believe that at some point in the future we suddenly have some kind of holy reverence for the descendants of dead 60s and 70s music stars. You know, in the same way that we have reverence for the descendants of all those great stars of the early 20th century. You know, like... Oh, wait, we don't even remember the stars of 100 years ago, let alone their children.

So, yeah, the idea that anyone would expect Joanna Lyon to follow in the footsteps of her great-grandfather just didn't make any sense. I couldn't suspend my disbelief for that. Maybe that's my issue and no fault of the book.

Then, there was the issue of first person. I've mentioned before that I'm no real fan of 1st person writing (despite my love of The Dresden Files), and this book pushed all of my buttons on the reasons why I don't like 1st person. It (first person) offers way too many shortcuts, and Almazan took them all, frequently telling us how other characters feel and what they think without actually showing us the interactions to back those things up. But, at least, she didn't have Joanna stand in front of a mirror and describer herself to us, because that is the worst.

There was also the issue of the love story, which is of the insta-love variety, and another of things that push my dislike buttons. It's too frequent that we have a female protagonist telling us how she just can't find the right guy and she doesn't know how to act around guys and, besides, guys aren't that important, anyway, and BOOM! there's the perfect guy and she loves him and he loves her and there's never any question about what's going to develop. Then, once the characters have sex, the deal is sealed. That's it for life. Does that even happen in real life? Ever? And it's not that I expect a fantasy (in the sense that all writing is fantasy) to necessarily be true to life, but there could be some complexity to it other than the neurosis of the protagonist.

All in all, the book didn't feel fleshed out. There are too many gaps, too many things not followed through to their logical conclusion, too many things left unexplained.. Then, to top it all off, the book just stops. It's like Almazan got tired of writing and cut it off without any kind of resolution. Reading it on the Kindle made it even worse, because I was only at the 85% mark when Lyon's Legacy stopped. The rest of the book is promo stuff for her other works.

As I've said in other reviews, maybe these issues are with me. The book has generally very positive reviews, so, maybe, my standards are just too high. But, then, they are my standards for what is enjoyable reading for me. Either way, this book didn't work for me.
Posted by Andrew Leon at 12:00 AM