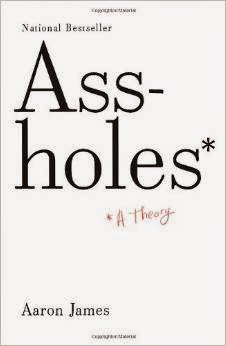 Assholes, by Aaron James, is a difficult book to walk past and not pick up. With a title like that, it's hard to resist. And I'm sure that it's the title that has made the book a New York Times bestseller. Probably bought as gifts, because, when you see a book called Assholes, you're bound to immediately think of someone who ought to have that book no matter what the book is ultimately about. For me, that person was myself. I mean, here was a book that promised to tell me where assholes come from and what to do about them. I didn't even try to resist.

Perhaps, I should have, though. But, ultimately, it's a different experience standing in the book store with the book in your hand than it is looking up the book online and being able to see what other people are saying about it. I probably would have bought the book anyway just to see for myself, but I would have gone into it expecting more of what it was rather than what I hoped it would be.

But that's not to say the book isn't without its charms. It does, for instance, give us a workable definition of what an asshole is:


In interpersonal or cooperative relations, the asshole:

Also, one of the main purposes of the book is stated to be "asshole management" or how to deal with the assholes in your life. Asshole management boils down to a cost-benefit analysis, because dealing with an asshole is never easy. You therefore have to always weigh the cost of taking a stand against an asshole against the benefit you will get from it. And, then, there is no particular strategy or set of strategies, anyway. He leaves it very "every situation is different," which is true, but, then, don't state that you're going to provide keys to asshole management if you're not actually going to do that.

There are some very interesting portions of the book, like the chapter about asshole capitalism, but I'm not sure I can say that the book is worth reading just for those sections. I also don't think there's any good way to know which sections any given individual ought to read. Personally, the thing I found most interesting about the book was how it came to be in the first place, which had to do with dealing with asshole surfers. Unfortunately, then, the asshole surfer thing serves as no more than a brief illustration about the larger asshole picture.

I suppose, in the end, I would say that the book is worth the read as a curiosity piece. Don't expect to get any actual, practical information out of it beyond the asshole definition, which is something you probably already knew, anyway, but had failed to ever put into words. Mostly, the book serves as a political soapbox from which James can call "asshole" at selected politicians and discuss how assholes caused the financial crisis (and cause most of them). I don't really have a problem with that in a general sense; those guys need more people to point the "asshole finger" at them. However, don't try to disguise that as a guide to identifying and dealing with assholes in regular life if what you really want to do is make a political statement. But, then, James is a philosopher so, maybe, that's all the same to him.

[Also, in posting this review to Amazon, I find it both supremely annoying and amusing that I will have to edit out every usage of the word "asshole" despite the fact that the book is named Assholes.]
Posted by Andrew Leon at 12:00 AM