Living with a Wild God: A Nonbeliever's Search for the Truth About Everything (a book review post) 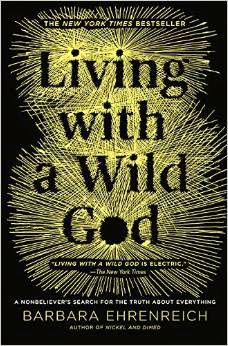 So a bit of preamble about this one:
1. This is not a religious book, not in the traditional sense. The "God" Ehrenreich is talking about is not the Christian god nor any kind of monotheistic god. It is not god in any sense that we generally think about "God."
2. I've previously read a couple other of Ehrenreich's books (Nickel and Dimed and Bright-sided) and really enjoyed them. She approaches her topics with dogged determination and doesn't let go till she gets to the truth of the matter. I've never, however, taken the time to learn anything about her other than that she was a journalist who eased into books. As it turns out, her background is in science and she, in fact, has a PhD in... well, I forget in what, because she shifted what she was studying numerous times, and I forget what the doctorate finally ended up being in (and I don't feel like trying to find it, now). Something to do with immunology, though, I think. The science background explains why her investigative work has always been so thorough, though.

Speaking of science, this book contains a lot of hard science, descriptions and explanations, things I found fascinating (especially her experience with the silicon oscillations), but I can understand this being a barrier to many (maybe most?) readers. In fact, I scanned through some of the negative reviews of the book and many of them had to do with "too much science" or "I couldn't understand all the science." This book is definitely not written to be easily accessible to a large audience as her other books are. This book is personal, so all of the science, which is intensely personal to her, is left in. I'm not sure the book can even get to where it's trying to go without the science.

The other thing that can be an issue with the book is that it takes Ehrenreich a long time to get where she's going. She mentions in the foreword that there was an "event," a mystical experience, that happened to her when she was a teenager and that figuring out exactly what that was was part of the impetus for Living with a Wild God, so you start reading and expect to find out about this event and her quest, but... what you get is her childhood. And it was a horrible childhood, not that it seems she saw it that way at the time. When you grow up in that, though, you think it's normal.

It takes a long time to get to the event and, the whole time I was reading, I kept wondering what the point was of all the stuff she was telling me. Why did I want or need to know about her childhood and, well, everything else? But I trusted her, based on my prior reading experience with her (and the story she was telling really was interesting even though it seemed as if it had nothing to do with what the book was supposed to be about), to be going somewhere, so I kept reading. Then, eventually, we do get to the event, and it all made sense. I mean, without all of the background (and I do mean all of the background), I don't think you can really understand the significance of what happened and what happened after.

So I'm going to go back and say that this is not a religious book. This is not a book about how some atheist went out searching for the Truth and had a conversion experience (as in The Case for Christ). This is a book about an atheist who went out searching for the Truth and found... something. Something unexplainable. Something that isn't the "good and loving" god that Christians so often hold up as a happiness dispenser. What she found was something... primal. Chaotic. Only "good" in the sense that a storm can be good or a forest fire can be good.

This is not a book for people who already think they know it all and who think they have all the answers, especially about who and what god is. This is a book for those, like in Wizard of Oz, who are willing to look behind the curtain. Don't plan on an easy read.
Posted by Andrew Leon at 12:00 AM