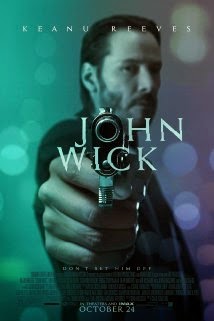 John Wick is a simple yet elegant (violent elegance) revenge story. Seriously, it spends 15-20 minutes setting up the "you took my stuff ["stuff" not necessarily being tangible items]; now I'm going to kill you [bitch]" scenario, and everything flowed from there. After that, it's more than an hour of nearly non-stop action and mayhem and lots and lots of bullets. It's kind of amazing in its simplicity, actually, because lots of action movies go for this sort of thing but make the "reason" way too complicated. John Wick hits it just right.

I think the reason it really works is what I'm going to call the "asshole paradigm." See, Wick runs into an asshole. One of those entitled assholes who thinks it's okay to do whatever he wants to do so, when Wick tells him "no," the asshole has to wreck Wick's life. We've all run into those guys (and, yes, "guys" means men because it's almost always men) who think they should just get what they want by virtue of nothing more than who they are and who will resort to violence of some sort (not necessarily physical) to get it. Generally, we are unable to do anything about those people. Which is what makes Wick so great because, after the asshole does what he does, we find out who Wick used to be, and Wick goes after him. It's very... cathartic.

So, yeah, if you're not into action movies, this one isn't for you. If you're looking for a deep, meaningful, complicated story, this one isn't for you. This is pretty much as straightforward as you get. It's as straightforward as two kids on the playground who have a fight because one kid has a toy the other kid (the asshole) wants. But with bullets.

Keanu Reeves is perfect in this part. I mean, he's so perfect that there are, maybe, only one or two other actors who could slip into this role without looking like they were trying to wear a suit coat that just didn't really fit.

Speaking of other actors, all of the other actors in this were great. You might say that it shouldn't be a difficult job to have a small part in a movie like this, and that might be true, but it didn't stop all of them from fitting their roles like fingers into a glove. Of particular note were Alfie Allen (the asshole), Willem Dafoe (the wild card), Adrianne Palicki (whom I am liking more and more and I hope that Marvel goes all the way with her and actually turns her into Mockingbird), Lance Reddick (who is probably generally underrated), and Ian McShane (whom I just like). Oh, also, Clarke Peters (from The Wire along with Reddick and just very good).

These kinds of movies are what I would usually refer to as cotton candy. A lot of fluff but not a lot of substance. However, despite the fact that this movie is probably something like 85% action, it's backed by a kernel of solid story with enough hints at the back story to make it really intriguing. Basically, it escapes my cotton candy classification, and I will actually have to watch it again. It may even be a movie I need to own, which is saying a lot from me for an action movie.

So, if you like action flicks, I'd say that this one is a must-see.

I just hope they don't decide to do a sequel. If anything, go back and give us the back story, but this one feels complete and doesn't need anything after.
Posted by Andrew Leon at 12:00 AM