It took a long time, but I finally finished The Casual Vacancy by J. K. Rowling. 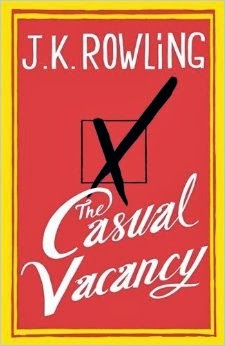 My first impression of the book remains my impression of the book now that I've finished it, that Rowling was trying too hard to be "adult." It's like the stereotypical starlet who goes out of her way to do as many nude and/or sex scenes in her movies as soon as she turns 18. Or, you know, like Lindsay Lohan or Britney Spears. Or, prior to them, Drew Barrymore (if any of you remember when she went through that stage and posed in Playboy and all of that). It's not that there is sex in the book, it's that any time there was anything sexual, she conveyed it in the most crude and vulgar way possible. Like the detailed description of a young girl's genital area in a quasi-sexual way. It just seemed to me like a cry of, "Look! I can write adult stuff! I can!"

Aside from that issue, though, it's quite an interesting read. At least it is for a while. Well, it's interesting like a traffic accident is interesting. I mean, none of the characters are what you would call "good." So here is the spoiler warning before I go on.

The most interesting thing about the book is that the only "good" character, the protagonist, dies. No, not somewhere along the way; he dies right at the beginning. That's the inciting incident. And, no, he doesn't come back to life nor is he a ghost or anything like that. He's just dead. The rest of the book is about this election because of his vacated council seat and, along the way, we find out how he influenced his community. We find out just how good he was, which shows us all the failings of the people around him as they are set up against the person he was. I suppose the effect is like taking over a new job and having to listen to everyone go on and on about how great the previous person was. You form a picture of that person (distorted, sure) without ever meeting him.

On the other side of that, none of the other characters are really likable, so there's no driving force to keep reading. You're just not rooting for anyone. So, although the book is really well written and interesting in the way it's put together, it's really hard to feel any empathy for any of the characters. As soon as you start to think, "well, this one's okay," that one will do something horrible to someone and it becomes, "well, never mind, then." I suppose the closest we get to a character we want to see make it is Krystal Weedon, but that's only because Fairbrother (the dead guy) wanted to see her make it. You do feel sorry for her from time to time, but she's also not a very nice person, with reason, so it's difficult to retain that bond with her.

There are two main failings of the book. The first is perspective. It's third person omniscient, but it's kind of all over the place. There are a lot of characters, so there is a lot of shifting perspectives, which isn't really the problem. The problem is that Rowling has no pattern she follows for this. Sometimes, she takes the characters by section by section so that there is a clear change in character perspective. However, sometimes, it's like being at a party with a video camera and the perspective changes as you walk around and film different people. One paragraph you're with one person and the next, because someone more interesting walked past, you're following someone new around. If Rowling had used just one of those formats, it would have been okay, but switching back and forth made it a bit muddled. Still, if this had been the only issue, it would have been fine.

The other issue is the one that makes the book not really work for me in the end. Even though Fairbrother is dead, he serves as the main character for more than 75% of the book. Near the end, though, it's like Rowling decided that she just needed to end the story (which she did), and events quit revolving or being related to the death of Fairbrother. (And double spoiler alert!) It is not, however, because events gradually diverge; that could have worked. Instead, she just starts killing people. Everyone comes into a personal crisis all on the same day, and she resolves the crisis of the book not by resolving the crisis of the book but by delivering arbitrary death upon characters. It was just... unsatisfying. It wasn't even death in a Shakespearean sense where everyone kills each other. There just needed to be resolution, and that's how she did it. I suppose there's not a better way to bring a character's story to an end. Unless you start with that character's death, I guess.

So... great writing on the micro-level. The characters were well-developed and fascinating, just not likable. But the perspective changes and failure at the end made the book just not work for me overall. Few of the characters really learn anything or have any character growth; it just ends. I suppose that's because the death of the one character we're supposed to want to make it, the thing that would have made Fairbrother's life mean something, brought Fairbrother's story to a close. But nothing felt finished even though there was nothing more to say.

I suppose that's real life, but, although I want realism, I don't read a story for real life. I want a story arc, not just a bunch of stuff that happened to some people.
Posted by Andrew Leon at 9:15 PM